Saturday, I was signed up to ride the 75 mile course for the Marion County Boys and Girls Club Cycle Challenge. Some opted to do the 40 miler, but of course I had to take on the bigger challenge. The course consisted of one 40 mile loop and then another 36 or so mile loop, with a bbq lunch at the park in between.

I left the house shortly before 7am, picked up some coffee and headed north for 90 min or so. I got there around 8:30, grabbed my packet and got ready. The morning was sunny and I opted to go with no arm warmers and the addition of sunblock.

The ride began at Willamette Mission State Park. It was such a beautiful drive in. There were hops growing on these strings everywhere (one of the other riders told me what they were). 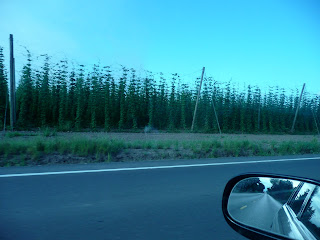 It started around 9:15 after the race director announced the sponsors and introduced the youth cycling team, "Flow Riders" that was sponsored by the Boys and Girls Club and had trained to ride the 75 miles. There were about 10-15 of them (in yellow jerseys). 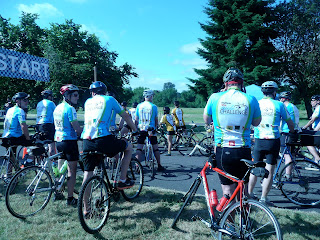 The first few miles were slow and lead by a police motorcade. But soon enough we were free flying. 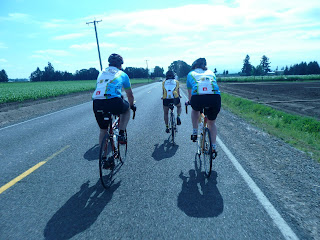 After about 15 miles, I was pretty much on my own, but could see other cyclists behind and in front of me. Mile 20 was our first aid station at The Oregon Garden. They had bananas, oranges, pb&j, and the best locally made marionberry cobbler! I made it out of the aid station in 5 min flat. 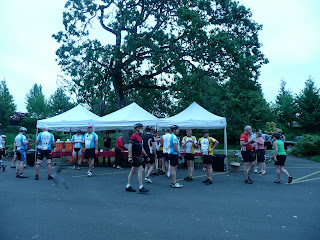 Enjoying the scenery and my tunes. Left knee pain started around mile 20-25, which reminded me how badly I need a bike fit. Bike fits essentially get you properly aligned on your bike and tiny adjustments can make all the difference in the world! 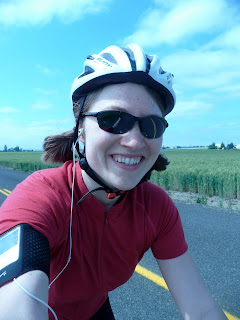 At some point, I had to slow down for roosters crossing the road. That's when you really know you're in a rural area. ;) 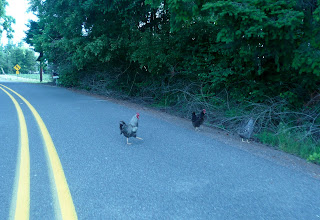 I skipped the fuel stop at mile 30 because soon enough we'd be having our lunch back at the park. I rolled into the park shortly after noon. I grabbed a burger, cookie, sliced apple, baby carrots and lemonade. Crazy how much you can eat when you're just buuuurning those cals!

Fueled up, I headed out on the second loop. I think most people were doing the 40 so they were just enjoying their lunch. I took my sweet time (20-25 min) but was ready to get back on the bike. To my hilarity, our second loop of 36 mi took us to a ferry where we had to cross the river. 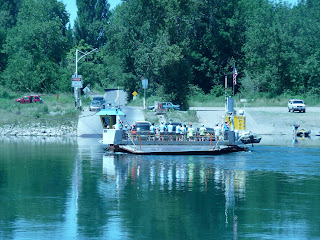 This is when you know you're doing a bike RIDE and not a bike RACE. Standing on ferry. 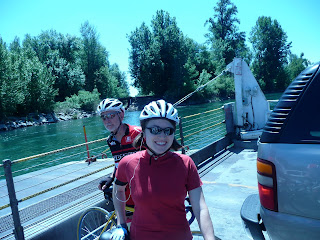 The second loop consisted of more farmland and a lot of wineries...maybe 10-15! And I found a few hills as well (a few more than the first loop I think). 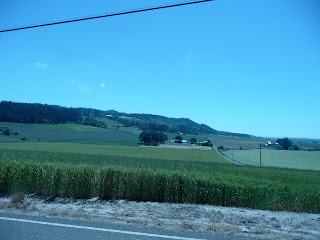 At the start of the second loop I decided I wasn't going to stop at the midpoint aid/fuel station. I was tough enough to just cruise on past, especially after my humungo lunch. Besides, I had plenty of water and sports drink AND it would save me time. 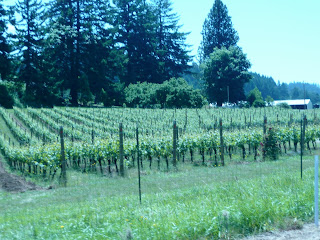 I generally enjoyed just looking at all the scenery and listening to my tunes. Everyone asked if the manfriend rode with, but no, he prefers things that involve competition and a race to the finish.

I had a lot of fun though even on my own. That being said, it would be fun to do one of these rides with someone of similar strength and speed. Around mile 55, my muscles were feeling fatigued but no serious pain. 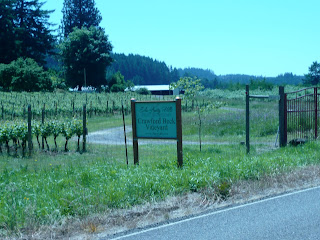 By mile 70, my fat feet were numb in those skinny cycling shoes. I wasn't too surprised.

At exactly mile 72.67 (yes, i checked) I encountered a very steep, but short hill to which I gave a few choice words, down shifted and pedaled up. Hill not shown, but just imagine it. Steep and about 1/4 mile long. I survived.

After about six hours of riding (rest stops included), I was finished with 77.65 miles completed. I was definitely happy to be off the bike, stretch and wipe the grime off my face, arms and legs. 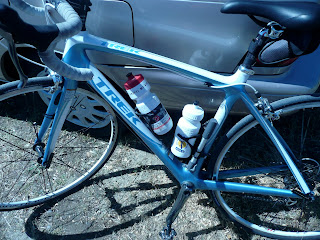 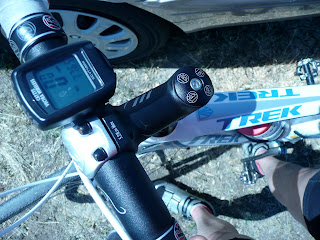 All in all, it was a great ride. Well organized and a lot of fun! The course was marked so well it would have been hard to make a wrong turn. At every turn there was a piece of paper on a pole with an arrow pointing the correct direction AND spray paint on the pavement confirming the direction.

I definitely felt that this year's 75 miler was stronger than last year's, which only makes sense. I've put more time in the saddle and feel stronger in my cycling abilities. Last year I remember the final 10 miles just being painful on my rear, knees and legs. But on Saturday, I was tired, but not "GET ME OFF THIS BIKE!" tired.

I'd still say a marathon is about 5x as hard as riding 75 miles, but I love to put my body to a new challenge. What's the most challenging thing you've completed (physically or mentally)? Mentally: mine would be getting over a lost friendship from college. Physically: mine would have to be the marathon (vermont city marathon or whidbey island).
Email Post
Labels: 75 miles Cycle Challenge cycling

ultrarunnergirl said…
Awesome! Sounds like a great ride. And scenic, from your photos.

My hardest thing ever:

Amber said…
I'm starting to get more into biking and I really enjoy it. Last night I biked 10 miles - measly compared to your big ride - but it really made me realize how much EASIER biking is on your body than running!!

Next year I plan on saving up and getting a NICE road bike that fits me properly! My Canadian Tire one is GREAT for only $100 but if I want to seriously get into it I need a better bike!

Anonymous said…
Congrats! You've definitely come a LONG way with the cycling if a 75-mile ride consists of just cruising with your tunes and some fuel :) Love it.

A few quotes up there made me laugh..."tiny adjustments can make all the difference in the world!" <- D just adjusted his Shoe/clipin thing (ya know, technical stuff) by ~1 mm b/c he was having some "numb" issues...and it's totally fine now. Luckily he KNOWS how to do that kind of stuff, but seriously, who comes up with this?!

Lisa from Lisa's Yarns said…
Wowsers - well done! Biking that far is amazing so good for you!

Mentally: The whole Target job experience and deciding to leave that job and the aftermath/terrible feelings I still have over the whole experience...