Friday night after everyone had reconvened at Pete's parents' house, we took the pontoon boat over to the local golf course for dinner. The golf course is the happening place in these parts.

Beautiful sunset and cocktails on the way over - gin & tonic for me! 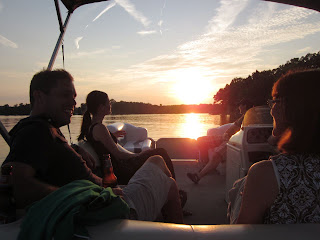 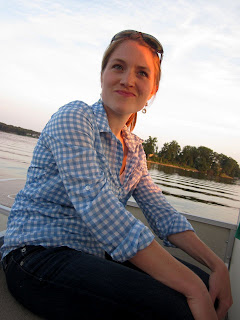 Notice I was wearing jeans because my feet and legs had already been eaten alive by the mosquitos the night before. 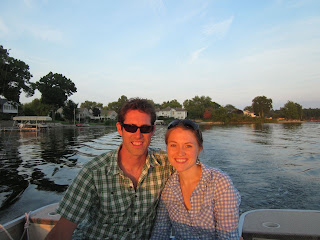 I guess we were a bit matchy-matchy that night. 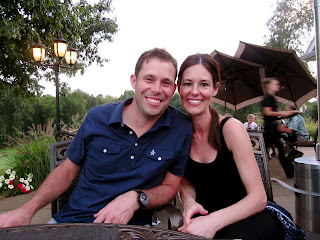 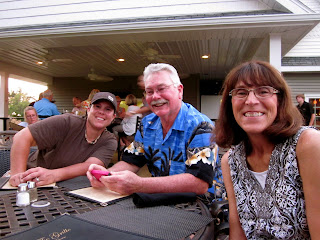 Dinner Friday night was probably the most fun meal we had. Cheryl and I picked out a tasty bottle of Malbec, which turned into two (with help from others). I opted for the mahi mahi for dinner, which was delicious.

After a few drinks for everyone, the boat ride home was just a bit entertaining... 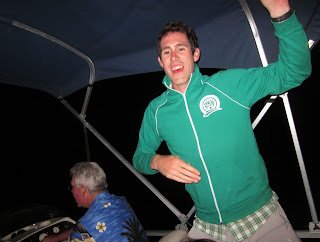 But enough about Friday, on to Saturday!
Saturday morning I opted not to run thanks to plenty of drinks and feeling a bit under the weather.

Morning on the lake 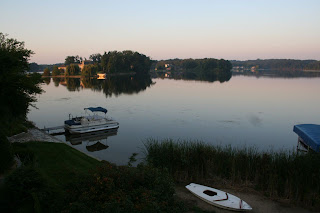 A white tent arrived that the boys got to work setting up. 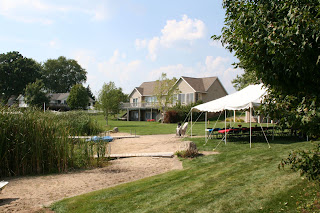 After the tent was up and the food had been sliced and diced, "the kids" headed out for some tubing.  While I usually love tubing, I was just feeling a little skiddish that day so I took two pretty decent face plants into the water, which left my neck sore for days.

No matter how freaked out I am, tubing provides endless laughter. Especially when I'm behind the camera rather than the boat. ;) 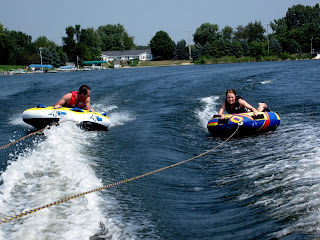 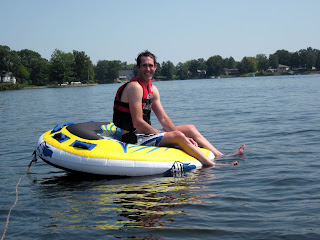 Then it was time to party! Food, family and friends started rolling in. I was starting to feel pretty run down and alternated taking Vitamin C and pain relievers for the rest of the day. 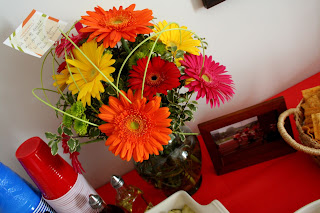 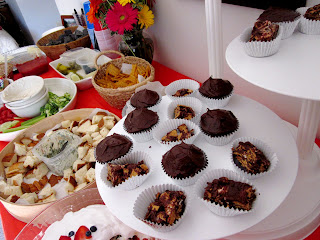 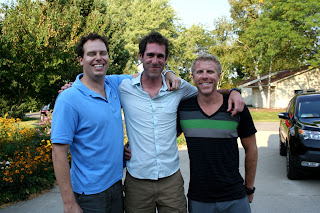 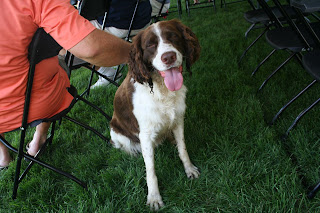 I love this photo. And yes, I'm short. 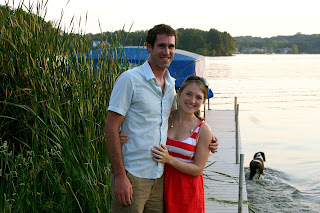 Just a few minutes later, the manfriend joined in on a little water tackling. It was originally Operation: push Jon into the lake. Once the kids were successful, it was a full on water wrestling match. 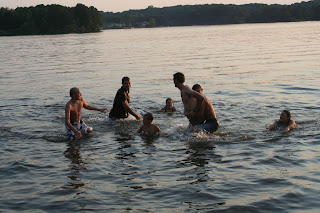 Someone (ahem, Pete) couldn't stand being left out. The takedown continues...

A few of us stayed chatting under the tent until about midnight when I had to call it quits. It was far beyond my bedtime, but these kinds of nights don't happen often. Truth be told, I could have gone to bed around 7:30 that night.

So there you have it, our Michigan engagement party! It wasn't anything formal (it wasn't supposed to be), but it was a great opportunity to bring family and friends together and celebrate with those who may not be able to make it out to Oregon next summer.
Email Post
Labels: engaged Michigan vacation

Miranda @ Biting Life said…
Aww looks like you had a lot of fun! I've actually never been tubing, although I've always wanted to try it. That dog is adorable :)
August 31, 2012 at 3:19 PM

Raquelita said…
It sounds like a fabulous time and the spread looked to be delicious!
August 31, 2012 at 7:18 PM

Lisa from Lisa's Yarns said…
Sounds like such a fun weekend! That is a bummer that you got sick. It's tough to be all 'rah rah hi everybody' when you just want to be in bed... You look beautiful in all those photos, though. Love the stripes! And the matchy shirts in the 2nd pic! :)
September 2, 2012 at 5:56 PM

Heather @ Dietitian on the Run said…
So much fun! Doesn't need to be formal, as long as it matches "you" (which this definitely seems to) :) You & Pete are so cute. Glad you had such a great fam + friend celebration!
September 5, 2012 at 4:41 AM