I don't know about you, but this weekend was a scorcher! People in Oregon complain of the heat when it hits 90 so Saturday's high of 101 wasn't exactly pleasant.

But come rain or high temps, weddings must go on. High school friend Jackie married James whom she met in the town we grew up in at the local athletic club. Jackie's mom was actually the matchmaker.

We got to the wedding shortly before the ceremony and stayed in the shade sipping on ice cold water until it was time to take a seat. 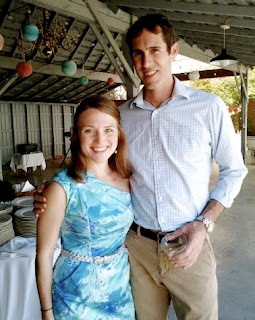 My nickname for Jackie is "Jack Attack" from her old high school basketball days. She was a beautiful bride despite the heat. I can only imagine spending hours in a long, heavy dress in those temps. 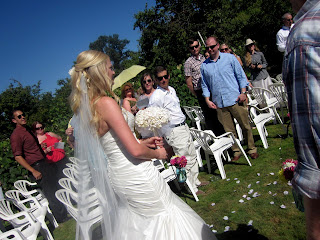 After the ceremony, we all loaded up on more hydration and tried to stay in the shade. 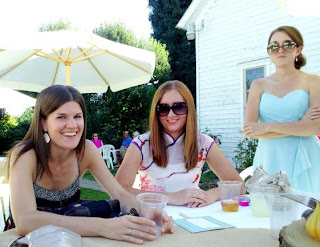 I loved their cake and wedding topper. Jackie even made the topper herself. Candy bar is in the background. 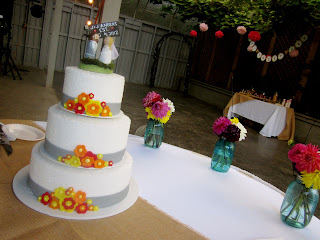 Of the three cake flavors, banana was my favorite. It was totally unexpected, but AMAZING. Tasted like banana bread, but in cake form with a little banana cream frosting.

Jessica's baby, Evelyn is now 1 and walked her first steps on Saturday! She is adorable. 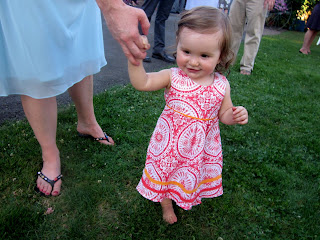 The high school crew who came from Salt Lake City, Seattle, Eugene and in between to celebrate. 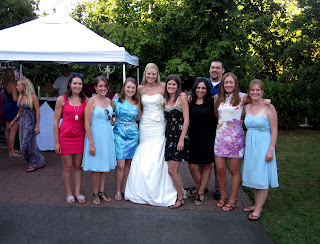 As the evening started cooling off, the dancing began as well as a life size game of Jenga. 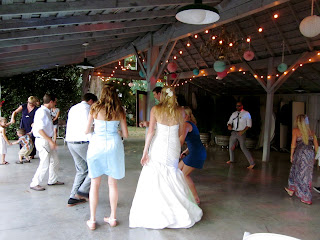 The night ended with heading downtown Portland for a few drinks before we called it a night.

Sunday we went to breakfast at the Waffle Window - trying to spend every last minute with friends we don't get to see often enough. 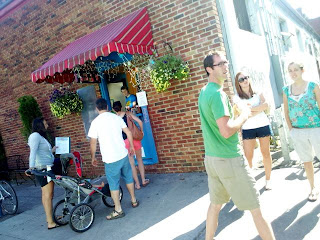 I went with a savory waffle topped with gruyere cheese and ham topped with maple syrup - definite flavor explosion.

Then the manfriend and I checked out Cathedral Park under the St. Johns Bridge. Beautiful views and architecture. 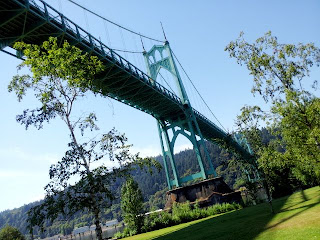 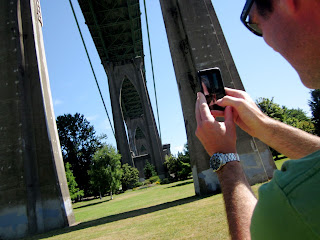 Sunday was another scorcher. I honestly do NOT do well with heat. I was getting pretty cranky and tired when we got home so I took a nap and then a cool shower.

After the nap, we ventured to Chipotle for an air conditioned, easy meal and Trader Joe's for the week's grocery supplies.

Our views on the way home were spectacular. 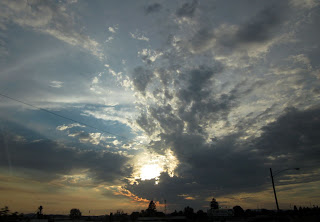 And that's all she wrote folks! I hope you had a great weekend. Per the usual, I need a weekend to recover from my weekend!


On the running front: The manfriend and I did a little trail running/mt bike riding on Saturday morning before the wedding. I opted to have last week be a recovery week because my body clearly needed it and because the week prior had been a bit harder. I'm hoping this week my body is back on track with what I have in mind for it. ;)
Email Post
Labels: Cathedral Park high school friends Portland waffle window weddings

Lisa said…
What was their location site?

Lauren @ Sassy Molassy said…
Lisa - it was the Heritage House Farms and Garden in Aurora. A couple owns and operates it and rents their property out for weddings.
August 6, 2012 at 9:56 AM

Tasha Malcolm said…
You have had a busy summer with weddings. I can't imagine the weather being abouve 90 and having to wear a wedding dress. That would not be fun, but she did look beautiful. I really liked her homemade cake topper and the cake.
August 6, 2012 at 12:54 PM

Lisa from Lisa's Yarns said…
You looked beautiful - that blue color looks so beautiful on you!! I am glad you guys had a good time, despite the heat. Eeks, that is warm!! I would have been a hot mess!

It was great catching up with you last night! :) Hopefully the step back week has been good for you and you have a great week of training!
August 6, 2012 at 3:11 PM

Raquelita said…
I agree with Lisa that you look gorgeous in that blue dress! Your friend was a beautiful bride and if she was suffering from the heat in that dress it certainly doesn't show in the pics.
August 6, 2012 at 5:52 PM

Heather @ Dietitian on the Run said…
Such a beautiful wedding! Our friends tied the knot on July 1, outside, in DC. We couldn't believe they gambled with these summer temps, but it was gorgeous and most of us didn't notice it too badly (the guys in suits may have had a different opinion). :)

Amber said…
What a beautiful wedding! That is HOT though! Glad you had a great weekend with old friends! I agree with Lisa, that blue dress looks great on you!
August 7, 2012 at 9:39 AM