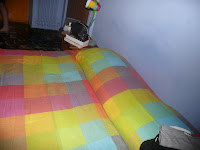 We arrived in Rome around 3pm and made it to our first hostel, Hotel Colors only 90 sweaty min or so after getting out of the train station (after a sloooow 2 hrs from the airport). Let's just say, reading road signs and trying to figure out where we were took a while, even after the police told us where to go. We finally arrived to a place that took the name colors to a whole new level. Bright shades were splashed on every wall, tile, bed spread, etc. 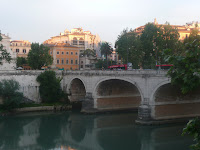 After showering, changing and calling our parents on my borrowed international cell phone, we headed out for dinner. Annie and I used our guide books a ton on our trip. She had Rick Steeves' Best of Europe 2009 and I had Lonely Planet's Europe on a Dime. Our first night in Rome we chose to head for a Pizzeria across the river that was suggested from my book. Not a bad call. This was the best margarita pizza and arguably the best glass of red wine I've had in my life. No joke. We quickly learned that the Italians don't eat dinner until at least 9pm so getting seated at 8pm was easy.

Here's the kitchen on our floor of the hostel. I made tea here both mornings, sat in the sun and wrote in my journal. 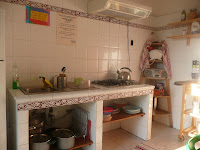 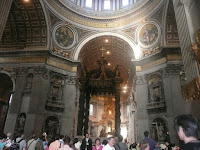 Sunday morning mass at the Vatican! We arrived just before 9 AM with our shoulders and knees covered (rules of entering the cathedral) for mass. A is Catholic and I for one am fascinated by religion and wasn't about to turn down the chance of going to mass at the Vatican. When the organ began to play and the priests walked to the front, my eyes welled with tears. It was just one of those moments you can't believe is happening to you. Then we saw these guys on the way out guarding the place. How many pictures do you think people have taken of them? Clearly, they're smiling for me. 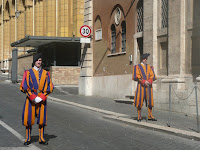 And a bit more quickly now...(click to enlarge photos)

Gelato #1 (Who knew that from here we would go for 5 days straight on a gelato tasting streak?!) 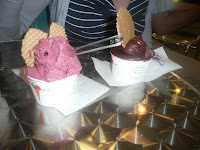 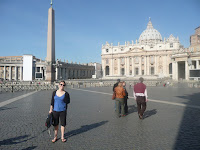 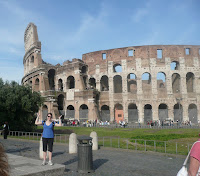 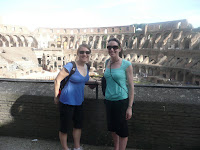 Congress Building (or something like that...our fav building in Rome from the outside) 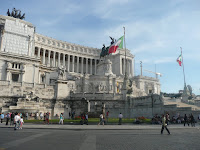 The biggest thing I noticed about Rome was that their driving was CRAZY and they park anywhere. It was hilarious. Seriously, cars (often tiny matchbox like Smart Cars) would be parked head first onto the sidewalk. People in Rome just make a parking spot for themselves where they need it. It was pretty much mass chaos to me anyway.

Next up: Florence, Italy! So many of my friends absolutely love this place and we did too.
Email Post
Labels: European adventures photography

KGreg said…
Wow, awesome pictures! I'm so excited to read the first installment of your trip. :) I've been saving up for a conference in Seattle, but I might just have to roll that over into a Europe fund.
June 9, 2009 at 8:12 AM

J said…
OMG I didn't know you could go to the Vatican for mass! That is so great. If I could go one place in Europe it would definitely be Italy, and mainly rome!
June 9, 2009 at 3:25 PM

Shoshanah said…
I remember our tour guide in Italy told us, they don't have driving laws, only driving suggestions. lol. My favorite was seeing a guy on a motorcycle stopped at a red light smoking & talking on his cell!
June 9, 2009 at 5:43 PM