Well, it feels like Christmas is upon us! The manfriend and I swung by the mall on Saturday and nearly every row and spot was filled with shoppers. Talk about madness. Glad we were only running into one store!

Sweet socks such as these are only worn for special occasions. One of those occasions is our friend Lonn's 120+ person Over the River and through the Woods 10K. This is the second year I've participated and as expected, it was a blast. 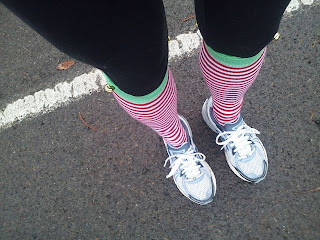 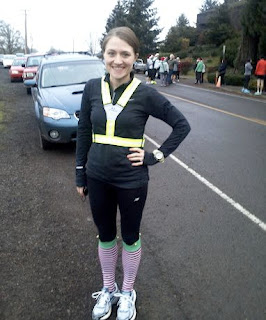 This unofficial race/fun run starts at a gym in Creswell, OR at 8am where we all run either 4 or 6 hilly miles to Lonn's family's house to dine on cinnamon rolls, pulled pork, fruit, orange juice, coffee, champagne, brownies, you name it! Lonn's family generously provides everything and hosts over 100 sweaty runners for the morning.

In turn, we all donate to a chosen food bank. This year we raised over $1,900 for South Lane Food Bank. Pretty impressive!

Danielle and I ran the 10K together. She's usually a bit faster than me, but opted to run easier. We took a short walk break up a bit of the hill, but not for long... The manfriend was right on our tails. 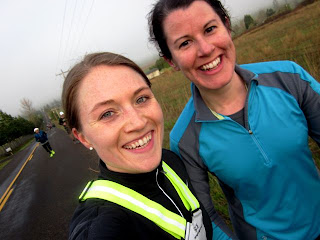 Almost to the finish... just a 1/2 mile uphill to Lonn's house the cinnamon rolls and pulled pork. 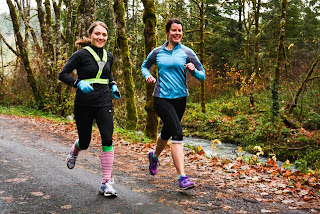 Thanks to Long Run Pictures for the great photo!

I finished in 52:55, which was about :55 slower than last year, but I wasn't pushing it and I opted to walk twice. The manfriend beat me by 40 seconds. 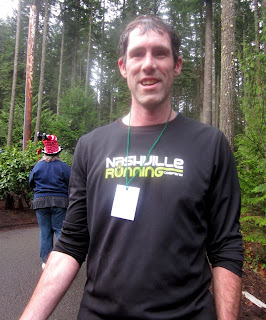 These runners don't mess around. There was even a massage therapist on site. 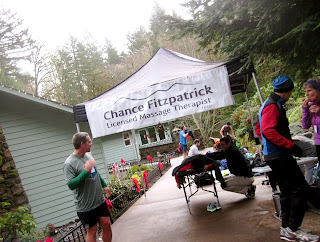 The other great thing about this race is the prizes! Lonn had some great donations and items gathered, including Picky Bars, running tops, coffee, hot cocoa, etc and at least half the attendees won something!

After a few hours of eating, chatting and holiday merriment, we drove home, showered up and hit the road bound for Portland. My brother and Sabrina were hosting a white elephant holiday party.

Long day, but oh so worth it. 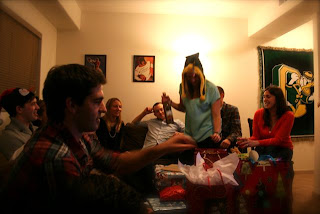 We ended the night just me, my brothers, Sabrina and Pete watching home videos that my dad had transferred to DVDs a few years ago. Hilarious and adorable all at the same time.

This morning we headed to breakfast at The Screen Door! Portland has a never ending amount of fabulous breakfast places. It's fun to explore a new one each time we visit. 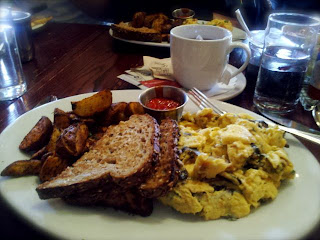 After the hour wait, I devoured my food. I had the mushroom omelet special with caramelized onions - seriously good!

My knee has been a little tweaky the last few days so I opted to walk a few miles this morning, but otherwise, we spent several hours in the car.

After a long, jam packed weekend, Jimmy Johns for dinner and sitting on the couch watching football and reading blogs was JUST what I needed. Hope your weekend treated you well!
Email Post
Labels: 10K fun run Over the River and through the Woods Portland

Tasha Malcolm said…
What a fun event to participate in. You had me at champagne and cinnamon rolls. YUM!
That was a really great running shot of you and Danielle too!
December 9, 2012 at 9:32 PM

Danielle said…
I'd have to say you are definitely much faster this year--kept pushing me up the hills! Thanks for being my running buddy. :)
December 9, 2012 at 9:43 PM

Lisa from Lisa's Yarns said…
Wow, that is a really awesome event and it's so cool that you all raised so much money for a good cause! Very cool!

I went to a shopping area this weekend and it was madness. Luckily I was in and out as I was just grabbing a gift card. I am pretty much done with my Christmas shopping and most of my gifts are wrapped, so I am ahead of the ball this year!

I had a great weekend, too. I got to see Phil both Friday and Saturday night - Saturday we went to a stripe-themed birthday party for a wife of his friend. I need to have a stripe-themed party! ;)

Lindsey said…
The run looks like it was a lot of fun! That is great so much money was raised.

Portland definitely has a lot of great breakfasts restaurants! I like trying different ones when I'm up there.

I hope your knee starts feeling better soon. I can't decide if I'm going to run today because mine is still sore.
December 10, 2012 at 9:30 AM

Heather @ Dietitian on the Run said…
Those socks may only have a purpose once per year but that's so worth it! ;) What an awesome, local "event".

Amber said…
That race/run sounds SO AWESOME! What a cool idea and great family for opening their doors like that!