First up: Food
This week's recipe is brought by the manfriend who requested grilled quesadillas after seeing the recipe in an ad on tv (Applebees he thinks, ha!). All you need is: whole wheat tortillas, homemade guac, grilled chicken and a little pepperjack cheese. 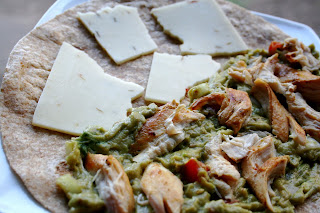 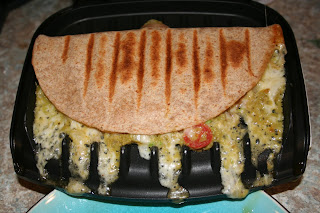 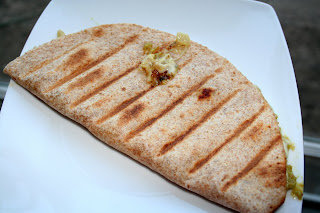 These turned out great, despite the cheese spillage. The only thing I would add are some black beans.

Now the Fashion
Remember when I went on a little shopping spree and hoped the manfriend would like this skirt? Then I wore it to Laura's wedding and now to work! I love when items I splurge on end up being worth it and totally satisfying in the end. 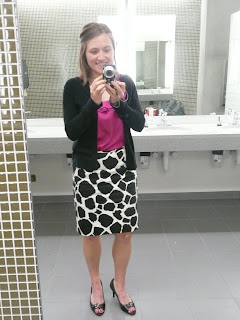 I opted to pay more than I wanted to for this at the LOFT (although I did have a 20% off coupon so that helped) because I thought the pattern and the quality of the material were worth it. I'm thinking this skirt will be one I wear a lot and end up being pretty affordable in terms of cost per wear.

For example, when I buy a pair of Danskos for $100 and end up wearing them oh, 300 times over several years ($0.30/wear) versus a $30 pair of Target wedges I had to donate after maybe five wears ($6/wear) because they were cheaply made and hurt my feet. Do you think of clothing purchases in cost per wear?

And on to Fitness
I thought I would show a little photo of the arms as I think they've definitely started to show more definition in the past month or so with my M/W/F strength routine. My whole body received quite the workout from Jillian's No More Trouble Zones dvd, The Fitnessista's awesome circuits, Lifeforce Fitness, my own cardio/strength sessions and the yoga challenge. 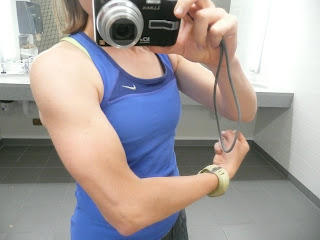 After work last night, I set out to meet the runners and coaches for hills of death. Running hills on a trail at your own casual pace is one thing, but running them fast with high knees and coaches watching is something totally different. In other words, my glutes and hammy's were in for a beating.


While this workout was pretty hard on my lungs and legs, it was also a step out of my comfort zone. My psyche wanted to run the continuous 30 minutes because it would be more mileage and less stopping, but I forced myself to go the other route to really work on picking up my knees and puuuuushing my speed up that hill. 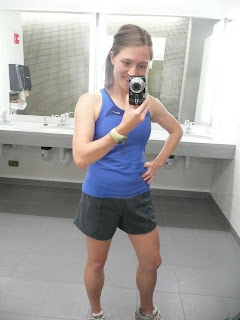 Thank you, coaches for always pushing us beyond what we think we're capable of! Well, I'm off to help Jolyn and her family with wedding preparations and get pedicures! I'm hoping everything goes smoothly. I managed to fit in an early morning 9 miler at 6 am today so I wouldn't worry tomorrow about missing miles. :) What's everyone doing this weekend? Do you think in costs per wear or some other spending strategy you need to share with us?
Email Post
Labels: fashion friday hills speed workouts

And that skirt is super cute. I totally think of clothing in terms of quality. Especially when it comes to my workout clothes. But I also like a cheap deal sometimes too :)
July 29, 2011 at 10:50 AM

I totally think of cost/wear. Which is why I spend a decent amoutn of money on clothes for work, like dresses from jcrew. Because they last for years and are classic looks. I wouln't spend a lot on something that is trendy. That's what Target is for. :)

I have a busy weekend of family stuff as my nephew gets baptized and another nephew celebrates his 7th birthday!
July 29, 2011 at 2:06 PM

Linz said…
Totally buff. Looking good.
I've started adding hills to my weekday runs but have no idea how steep my hill is/should be. I love the idea of mixing up my regular running routine with hills & drills! You're lucky to have a coach to inspire and push you.
July 29, 2011 at 8:30 PM

Heather @ Dietitian on the Run said…
Damn, girl! Work those guns :) Muscle definition and strength is just as satisfying as making it through a long, tough run. I hope you guys had fun at the wedding!