When I saw this fall inspired recipe with fairly few ingredients, I had to snag it. Then last Sunday, I promptly dragged man friend to Thistledown Farms to purchase the goods (and maybe a few homemade donuts). $20 later we left the farm with bags full of pumpkin, squash, leeks, apples, onion, garlic, carrot, etc that would serve as makings for a meat loaf (made last week), roasted pumpkin butternut squash soup AND apple crisp. Can you handle it?

So yesterday afternoon, it was high time I got to work on that pumpkin and squash. I present to you...
Roasted Pumpkin Butternut Squash Soup courtesy of Joy the Baker!

Man friend kindly helped me cut up hack through the squash and prepare it for roasting. Some serious muscles were needed. 35 minutes later...roasted. 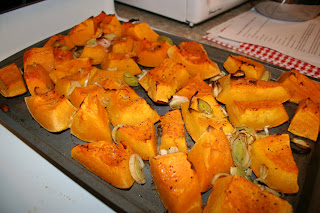 While the squash was roasting, I prepped the apple crisp! The fabulous recipe was courtesy of Kitchen Parade! 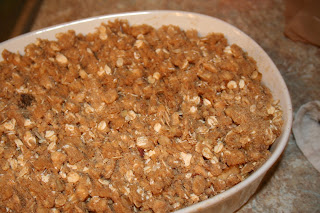 Then removed the skins and put in the pot for a little hand mixer and vegetable broth incorporation. 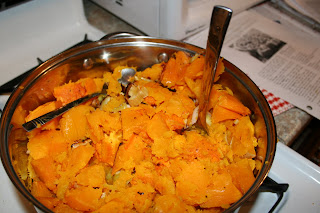 Thirty minutes later, a spoonful of lovin' brown sugar and a few pinches of nutmeg later...voila! 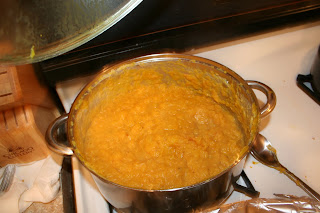 And I topped the soup with bits of organic turkey bacon! 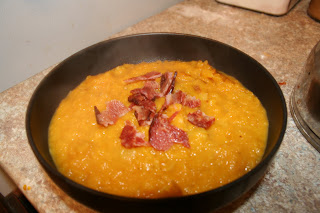 The apple crisp was put out to cool as we enjoyed the tasty soup! 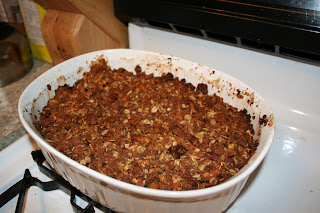 And I even hand whipped (for about 10 min straight) some whipping cream. Now THAT will build some good biceps! 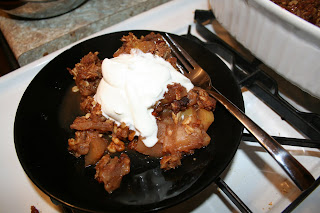 Have you ever hand whipped whipped cream? It was a first for me. It was also a first for spending three hours straight in the kitchen. But it was totally worth it. I'm seriously in love with fall and all the meals it inspires. What about you? Speaking of which, Halloween is gone, done, finito. It's only a matter of weeks before we've blown through Thanksgiving and Christmas. Crazy!

P.S. Saturday I managed a 12 miler, which was quite successful if I do say so myself. I was sore, but I pushed through mentally and physically and even got to see some early morning tailgaters and lots of USC fans. Go Ducks on the big win!
Email Post
Labels: baking adventures cooking

Alanna Kellogg said…
Hey Sassy ~ You totally did a kitchen work out!! Everything looks really good, so glad that apple crisp was worth hand-mixing the whipped cream. (PS Have you thought about an immersion blender? They're great and most I've seen include a little whipping thingie that works great for a small batch of whipped cream.)
November 2, 2009 at 2:57 PM

Anonymous said…
yeaaahhh ducks!! I was so pumped for you guys :) WTG!

3 hours in the kitchen?! whoa. Very impressive, Sass. Never thought about the work that goes into a squash soup....huge props on that one :) And you can Never go wrong with apple crisp (no i've never made whipped cream either!)!
November 2, 2009 at 8:13 PM