I'm happy to say my second 50K is in the books.

While this year's course was a bit more forgiving than last year's (when we had to do an out and back and run uphill the second half), it wasn't exactly "easy." The McKenzie River Trail technically is a gradual downhill if you run it the direction we did, point to point. However, there is a LOT of rolling terrain, lava rock and roots in your way from point A to point B.

Trails, my friends, are bootcamp for your hamstrings.

Overall, I ran this race harder than last year. I pushed more on the flats, didn't just cruise along and I kept the walking to a minimum in those last miles where ALL you want to do is walk.

Okay, on to the day.

Fuel: Woke up at 4:15 am, had a small bowl of cereal w/ banana and nectarine. Took some green tea and a piece of pbj toast for later. My handheld had nuun water as well as Shot Bloks and a Picky Bar. 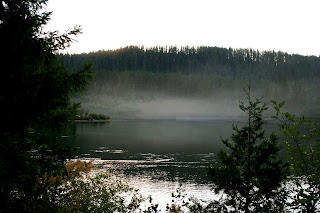 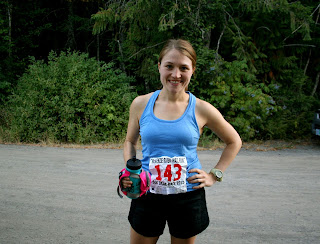 When the race started, I funneled into the line about midpack. The first 1.5 miles are uphill along the waterfalls and require a lot of hiking and little running. So being patient is key. In the end, the wasted energy of running wouldn't be worth it anyway. 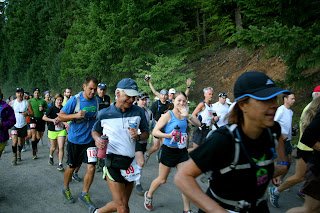 Around mile 4 as we circled Clear Lake, things started to spread out. 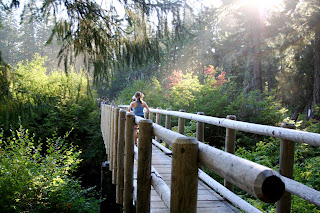 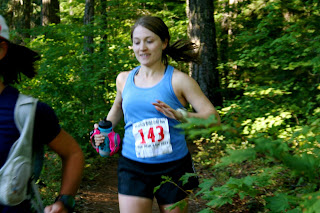 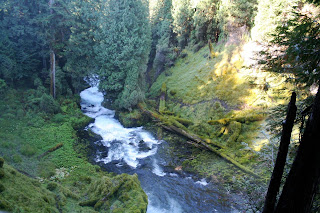 Naturally, as time went on, my legs became more tired. The hamstrings were tired by mile 10 and the quads felt like bricks the last 5 miles.

Midrace fueling: Shot Blocks starting at mile 4, every two miles (unless there was an aid station). Aid stations were at 5, 11, 15, 21, 26 and I had orange slices, an Oreo, pringles, m&ms and pbj tortilla. This seemed to work well. The hard thing with trail running is that your energy stores deplete much quicker than road so you have to stay on top of fueling.


I won't bore you with every detail of every mile, but here are a few highlights:

Glorious aid stations - not only for their Pringles, Oreos and water, but for the cheering, amazing volunteers and something to look forward to every 5 miles! 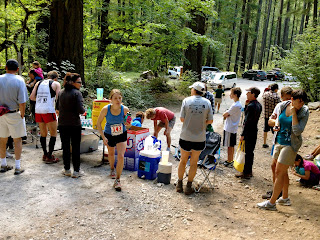 I could not get enough of the oranges at the aid stations! Sweet and refreshing. 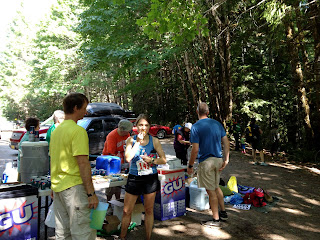 My second favorite part of this race (the amazing views are #1) is that with a few hundred people running at different paces, you often get to run alone, which is super peaceful on the trail. And then occasionally, you come across someone, maybe run with them for a bit and then pass or they surge forward.

I have to admit though, I hate being in front of a pack of runners on a trail. So much pressure to run fast enough for everyone. Luckily, that doesn't happen much during this race. 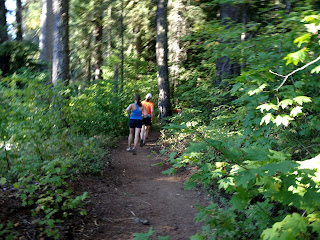 And finally, I was done! That water must have been pretty important. I hope the shirtless guy wasn't trying to talk to me because I was not paying attention. 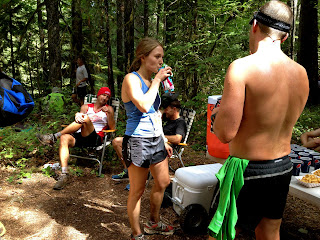 I did it - finished my second McKenzie River 50K in 5:32 according to my Garmin! I'm counting that as goal accomplished!

My mom is to thank for all these fabulous photos. Seriously, the best cheerleader!

When I got home I spent a good 20 min scrubbing my toes in the shower (they still have dirt in them) and then tried to stay parked on the couch relaxing and blog reading for a few hours. My left IT band and knee are pretty sore so I'm going to spend some serious time foam rolling and getting my yoga on this week.

So after doing this race twice, would I do it again? Yep! Do I ever want to run further than 50K? Not so much.
Email Post
Labels: 50K McKenzie River Trail MRTR 50K race recap trail running

Lisa from Lisa's Yarns said…
** waves pom-poms ** Congrats Lauren! You did amazing. Your mom is the best race photographer. Can I hire her for DSM? Ha, kidding. Something tells me I won't be as cheery looking in my photos as you were in yours though! You did amazing and this was a great recap. What a stunningly beautiful place to run!

J said…
Congrats! Sounds and looks like a beautiful course! I don't think i would ever do a 50k but that race does sound fun. Even in road races after a ton of miles, my eyes start to get blurry from focusing so much and concentrating!
September 10, 2012 at 10:31 AM

Redhead Running said…
I have a WHOLE NEW RESPECT for you crazy trail runners. Seriously. I just do not know how you do that. While the views are beautiful, the terrain is so HARD! Congrats on another 50k finish and your mom is seriously the best spectator ever! :)
September 10, 2012 at 11:46 AM

Amber said…
Your mom is SUCH A GREAT race photographer and fan of yours. I love that she comes to all your races and takes pictures and cheers you on :) I would also really love to do a 50 K one day. I'm seriously considering one for next year...

Also I have to say that I used to wish I worked from home but now that I work in a bustling office at a job I really love I can't imagine working from home every day! I do enjoy it as an occasional treat though :)
September 10, 2012 at 2:39 PM

Elizabeth said…
Absolutely amazing! I can't even imagine running that far although I can bet that those river views were amazing. Loved hearing the part about fueling etc--as that's stuff I'm still learning. Hope you're stretching out this week and relaxing :)
September 10, 2012 at 3:01 PM

Kristin said…
Wow, you rock! I wondered which of the many speedy girls who passed me on the trail might have been you (I did the early start so I was passed A LOT). Clearly you were one of the earlier rather than later! I read your race report from last year to get some ideas about the course...hello, lava rocks! I don't know if I'll ever do another 50K (there are too many marathons and half marathons that interest me), but I'm glad I did this one. Bonus--Dish Network worked out a deal with Pac12 so we could watch the game afterwards (that made my BF happy).
September 10, 2012 at 4:06 PM

Tasha Malcolm said…
You are amazing- great finishing time and great race pictures. Your mom did a good job documenting your day. 50K seems daunting to me, but I think someday I will run one, but I don't think I would ever want to run further than that distance.
September 10, 2012 at 8:06 PM

Kyria @ Travel Spot said…
Great job and what a great time! I love running trail races because of the fun snacks! You are so right about the fueling; it is hard to get that part down when you are used to road races! I am glad you had a good time and are not too sore today. How cool too that your mom came out with you! Aren't parents the best?
September 10, 2012 at 9:47 PM

Karen said…
Wow what an awesome race report! And you were still standing at the end of 50K! Such an inspiration. And I love those shorts- have some at your recommendation. Yes, I'm one of those that is motivated by having nice workout clothes. heh.

Luna said…
i loved this recap, thanks so much for sharing!!Maybe one day i can run one of those beautiful races you have in the States (a girl can dream, right?) I am truly impressed on your stamina, strength and recovery ability, it looks like all you needed to recover after a 50k was "two hours" on the couch ;) Congrats!!!!
September 12, 2012 at 1:00 AM

Tina @ Best Body Fitness said…
Those are some great photos! Love the one towards the beginning with your big smile on your face. :)

Heather @ Dietitian on the Run said…
Such an amazing accomplishment, no matter how many times you do it! I'm completely in awe of the Ultra crowd, and really hope to join those ranks some day. It's hard to grasp what it would be like to be out on the trails for that long, but I think your "quads = bricks" and delusions of hearing people gives us at least a little glimpse of that mindset ;)