This morning was the perfect opportunity to take advantage of this great part of the country I live in. The sun was out, the skies were blue and scent of wood fires wafted through the air.

I meant to get out of the house earlier to get in a nice trail run before yoga, but I let emails, tea and dog walking consume me for a while. After all, that's what weekends are all about.

Luckily, I still managed to get downtown about 45 minutes before yoga so I set out to run Skinner's Butte - the only hill near downtown and the yoga studio. 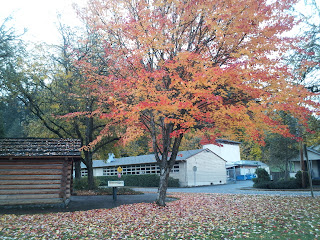 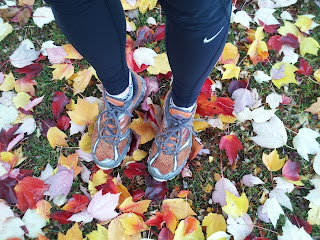 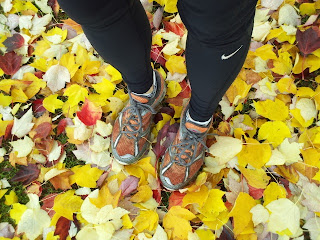 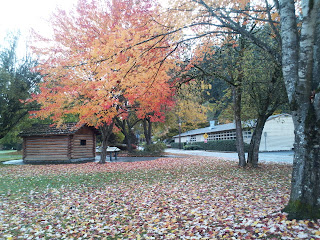 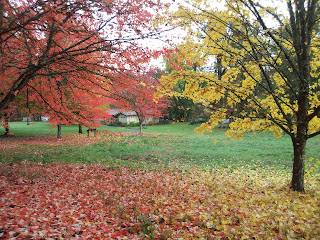 I cranked out 30 minutes of running through the beautiful leaves and up the hills until I had a bird's eye view of the city. 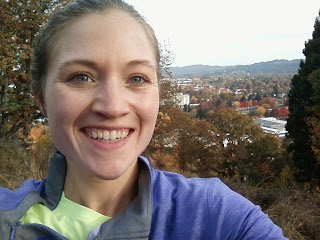 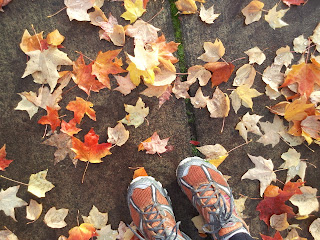 Did I mention I'm a little smitten with the fall leaves around here?

After my little jaunt up and around the butte, I went to Kira's power yoga class (always challenging in a sneaky way) and got my butt kicked. Then it was back home to grab the pooch and take her on a little hike/run, followed by a bath at the local "suds 'em yourself" place.

I'm now laying on the couch with Michigan vs. Illinois football on in the background. As much as a morning outside energizes me, it also wipes me out! While I don't really pay attention to games I'm not interested in, it's a calming noise to listen to.

Plans for the evening are to hit up a local coffee stout festival (hoping the coffee wakes me up) and then watch the Oregon Ducks take on the Stanford Cardinal. Goooo Ducks!

Need a tasty treat? I made these vegan rice krispies w/ peanut butter and dark chocolate on top last night for Lindsey and her boyfriend who came over for dinner. They didn't turn out super sticky (or nearly as beautiful as Spa Bettie's), but man they taste good.

Lindsey said…
My hike/dog walking and yoga tired me out today too. I like how you described Kira's class... you are so right! I finished off the rice krispies this afternoon, they were so good. Thanks for having us over last night. We had fun! Let's do it again soon :)
November 12, 2011 at 4:44 PM

Lisa from Lisa's Yarns said…
Wow, what a fabulous day! Those pictures are gorgeous. The leaves have all turned and dropped here, we are a bit ahead of you in the change of seasons, I think. Leaves aside, it was a beautiful day yesterday. In the 60s! Last year on this weekend, we had a blizzard and got like 1.5 feet of snow! Such a change from year to year - and a good one. I am NOT ready for snow!
November 13, 2011 at 7:53 AM

Amber said…
You have such beautiful fall colours! It is starting to change to winter up here and our fall is going away :( I was just saying to Eric how GORGEOUS the fall colours in Seattle are when we were down there though!
November 15, 2011 at 9:22 AM