Sunday morning, we fueled and then headed down to EWEB (Eugene Water and Electric Board) to get the manfriend signed up for the race and pick up my bib.

Proceeds from the race go to help families who can't afford to pay their heating and electric bills. And the race is super cheap ($30) so it's a win-win!

It was a chilly morning so a lot of runners were staying warm inside before the race. 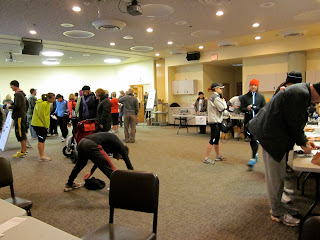 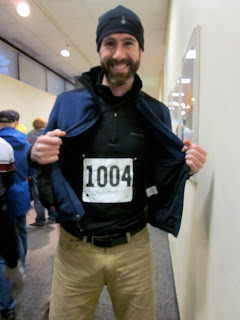 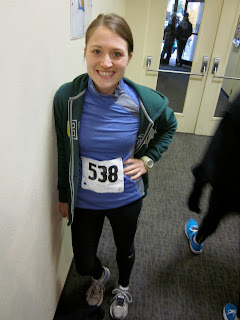 Eventually, it was time to head out in the cold, get rid of our extra layers and do a little warm up jog. There's nothin' like 35 deg temps to keep you moving! 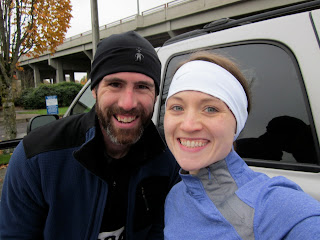 This is a fun race because so many of our running friends did the race so you get to chat with several familiar faces before and after.

I didn't talk about it here, but my goal for this race was to run strong with no plans to PR. And that's exactly what I did.

I took the first few miles getting comfortable with my pace 7:50-8:05 and then just kept it steady making sure I could hold the pace the entire race. The course follows the bike path along the river so it's fairly flat and fast.

By mile 7, my legs (and hammys) were feeling tired and I was just feeling the speed. At a few water stops I would slow down to a 8:15ish pace and have a hard time cranking it back up to a ~7:50. It's weird how 7:50 and 8:15 felt like identical paces to my body at times.

When I hit mile 9, I said "Okay, I can do ANYTHING for four miles." I continued to use that motto the rest of the race. The last few miles flew by and I was starting to pass a few people so that felt good. In the last few miles, I pushed it a bit harder into the finish line.

I finished just a minute slower than my PR about a year and a half ago. My 9th half marathon is in the bucket. 1:43:35 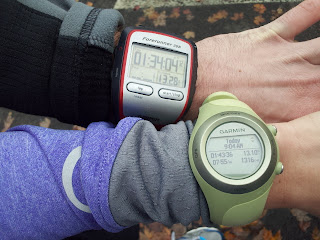 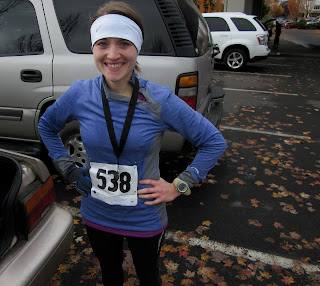 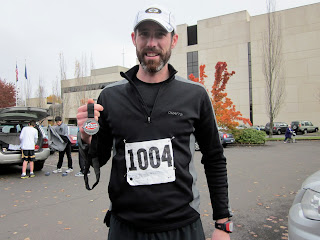 The manfriend said he felt pretty steady the entire race. You'll be proud that he opted to drink a bit of water when he could choke it down at aid stations and he had a chocolate Hammer Gel for fuel.

After Sunday's performance, he thinks he can run a sub 1:30 in the future. And yes, there WILL be another half marathon for this guy.

P.S. My hamstrings hurt. I gave them today off and opted to do a little yoga this morning and an easy spin on the trainer after work.
Email Post
Labels: EWEB Run to Stay Warm race report

Leigh said…
Dang, you and manfriend are fast! :) Congratulations to the both of you though...and that's awesome that manfriend will be running another half. Looks like you might have influenced him ;)
November 22, 2011 at 7:25 AM

Cynthia said…
Well done to you and the ManFriend!

J said…
Congrats to both of you! Awesome job! Hope your hamstring feels better after some rest!
November 22, 2011 at 4:02 PM

Lindsey said…
You guys both did so well! Congrats. That's great that the manfriend wants to do another half.
November 23, 2011 at 5:11 PM

Heather @ Dietitian on the Run said…
DUDE, nice work to the Manfriend! That's amazing. D & I just read this and were very impressed with his first half performance ;) He's definitely got a sub 1:30 in there, no doubt.