I thought it would be fun to have the manfriend talk a little about his training for the EWEB Half Marathon we're running this Sunday. Enjoy! 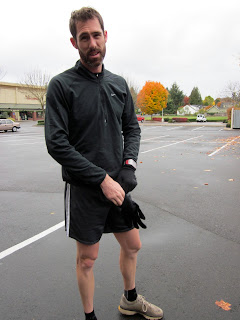 How long have you been training for the EWEB Half Marathon? And why did you decide to run the half marathon?


I've been training for about six weeks. After watching my lady friend train all summer and run the ultramarathon, I was inspired to do something I hadn't done before. Plus, I've been thinking about doing a half marathon for a while now. Remember when the manfriend and I ran a 10K in Michigan and he beat me by 6 minutes with little training?

What was your training like? How many miles a week did you run? How often?

In the beginning my training was pretty inconsistent. When I started running, I didn't have a weekly run schedule. Rather, I was just trying to build a bit more each week. It might not have been the best idea, but my body never got super sore so I continued upping the mileage. I usually run about three days a week with one of them being a "long run."

How did your long runs feel?

I did long runs of: 8, 8, 11 and 9 miles. The mental aspect of just going out for 1- 1.5 hrs wasn't too bad from all my time on the bike. It wasn't usually until the last few miles of the runs where I'd feel good. The hard part with long runs for me is trying to pace myself and not go out too hard so I have some left for the rest of the run.

What has been the biggest difference between running and cycling race preparation?

The simplicity of running makes it much easier to do. You can just go outside and do your workout in a short amount of time rather than having to spend 2-3 hours on the bike to get a good workout. 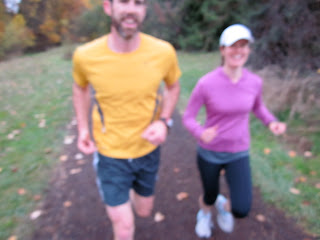 What do you do for fuel? What do you plan to do on Sunday during the half marathon?

That's a good question. I didn't do any type of fueling on any of my runs unless Lauren brought fuel to share. My plan is to bring a gel to take at the halfway point. I'm not sure how much I'll hydrate during the race since I didn't drink anything on the runs. Sassy will be hydrating throughout the race, fyi. 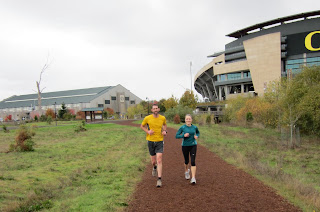 What are your goals for Sunday (time, feeling, how hard you want to push)?

After doing an 11 miler in 1:37 with Lauren, I think I could run the entire half in that same time since the long run had a few hills and Sunday's course is flat and fast. 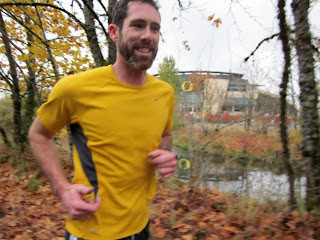 What advice do you have for the manfriend during his first half marathon? How many of you think he should train for a marathon next?
Email Post
Labels: 1/2 marathon EWEB Run to Stay Warm the manfriend

Amber said…
This was such a fun post! I love that you inspired him to do this :)

I think he SHOULD hydrate during the half though ;) My advice is to start out slow and pick up speed at the end! Oh, and HAVE FUN!

Heather @ Dietitian on the Run said…
This is awesome! Hey, 'manfriend' :)

I love how laid back the whole 'training' thing has been. No doubt he'll get a speedy (relative term, always) time for his first 13.1 - probably one that a few of us want to chase after!

Good luck on the race, and like Amber said - Have FUN. That ensures that you'll start signing up for more of these adventures ;)
November 16, 2011 at 4:25 AM

Raquelita said…
Good luck to the manfriend! I'm with Amber, I think there should be some hydrating going on during the race. Have fun!
November 16, 2011 at 4:27 AM

Lisa from Lisa's Yarns said…
Aw, this was fun to read. I LOVE that photo of you two running. I love how you are such an active couple!!

I agree with amber. Hydrate dude!! And don't go out too fast. You can always pick up the pace in the 2nd half of the half if you are feeling good

jen said…
I love this post! Good luck Manfriend. My only advice is to try to run the first couple of miles as easy as possible so he can finish strong!

Lindsey said…
Great post! I think the manfriend is going to kick butt this weekend! It's pretty cool that the mental aspect of the long runs wasn't bad for him because of his time on the bike. I think it's great you guys trained for this race together!
November 16, 2011 at 2:47 PM