Did Christmas just come and slap you in the face like it did me? I just realized today is the 22nd! It's not like I have a lot of gifts left to buy, baking to do or major plans other than work, laundry and running, but wow. That's what happens when you leave on a innocent little trip to see the Nutcracker with friends and then find yourself stranded for a few days in the worst snow storm Oregon has seen in 30 years. So, this is what I've been up to the last few days... 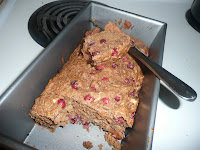 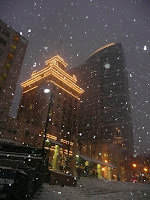 Went to see the Nutcracker with a few great hs friends in downtown Portland where snow had been dumping already for several days. Afterward we walked to Pioneer Square just to see the Christmas tree all lit up. We got a bit wet and cold, but it was worth it. The drive back to my friend J's was treacherous w/ 4wd and iced up windshield wipers, but we made it. How, you ask? Because we had NSYNC, 98 degrees and Mariah xmas cds in the car (and yours truly, mamma hen was at the steering wheel). 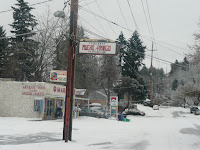 Walked to the mini mart down the street for mimosa and pancake provisions and cooked ourselves a feast. And later walked to Domino's for dinner, waited an hour or so for two pizzas and carried them back in the freezing rain so we could enjoy them while watching a crappy Lindsay Lohan movie "Just My Luck" on tv that I had never even heard of before (surprise surprise) that the guys even enjoyed. 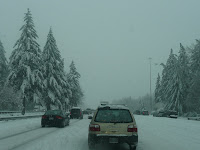 And drove in the snow, in chains w/ 4wd a long ways, finally making it home. Let's just say what should have taken me 1 hr took 3. I'm tired and had to take a vacation day to scrape my ice encrusted car, put on chains and escape the Portland snow storm. However, all was not lost. I did stop at Gap and get a new pair of jeans, a tank and a cuddly hooded wrap sweatshirt that were all on sale and then used a coupon. Yipee!

Looking back on the weekend, I can see two obvious themes: snow and food. It's no surprise why polar bears get so fat after this weekend. We were literally hibernating for three days, eating and drinking and forced to sit around watching tv and crappy made for tv movies because the wind was blowing ice and snow sideways and the roads were dangerous to drive on.
Email Post
Labels: holidays snow

Anonymous said…
Well, sounds like you're making efforts to turn that winter into something of a wonderland ... and I totally know what you mean about it already being Christmas week. I'm physically ready for Christmas, sure; my gifts are bought and my bags are packed. But I can't BELIEVE it'll be here, then gone, in a matter of days.

Anonymous said…
you guys are getting so much snow! gracious! i'll be up your way at the end of january. i wonder if it'll keep up! hope you have a great holiday!
December 23, 2008 at 10:08 AM