Honestly, I'm not sure why we Americans celebrate Cinco and I'm pretty sure whatever the reason, my personal excuse is another opportunity to eat fabulous Mexican food and drink a margarita.

I guess I don't really need an excuse, but when you love salsa and chips like it's your job, you'll take it. 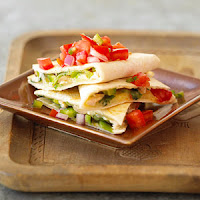 Not gonna lie, the runners want to go out for Mexican after tonight's run (and my pool workout) for which I may have done the initial suggesting. But I'm tempted to just head home, cook up these or these (while wearing a sombrero of course) and blend up a little Jose Cuervo and lime juice and call it a night.

And because I couldn't stand being a total history idiot today, thank you Wikipedia. Cinco de Mayo..."The holiday commemorates an initial victory of Mexican forces led by General Ignacio Zaragoza Seguín over French forces in the Battle of Puebla on May 5, 1862. The date is observed in the United States and other locations around the world as a celebration of Mexican heritage and pride.

Rachel H. said…
I definitely agree with you reasoning for celebrating Cinco De Mayo. I celebrate, so I can eat my fave food and have margarita's...A GREAT reason, if you ask me.
May 6, 2008 at 5:43 AM