Last Sunday, the manfriend and I ran the Autumn Trails 10 miler. I had preregistered, but the manfriend definitely "hopped in" this race on race day. I think he didn't want to let me have all the fun. ;)

I had originally hoped to run the 16 miler, but had to drop down to the 10 because I needed to leave shortly after for a work event in Portland.

Because this was a "just for fun" race, I didn't do any kind of tapering. It's hard for me to think about easing back for a race that's less than a half marathon. Call it distorted perspective. In fact, I ran a HARD workout Thursday night with the speed group, ran 3 miles on Friday, and 5 miles before yoga on Saturday. Nothing like running on happily tired legs! 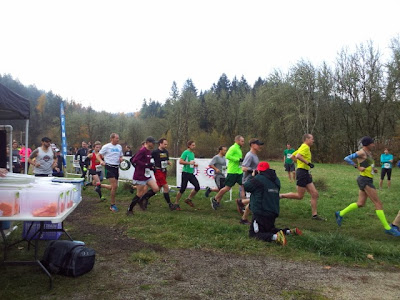 The weather was foggy and in the mid 40s at start time. The start was staggered with each distance starting every five minutes (16-10-6-3.5 miles). I was in the porta potty line until two minutes before my wave went so that was a little nerve wracking, but it all worked out!

Luckily, the race organizers let us do a mile warm up on the flat bark before sending us up, up, UP onto the Ridgeline Trail. 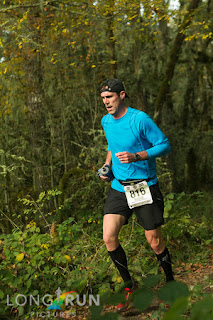 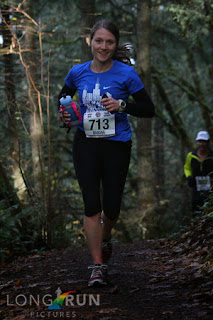 I was quickly reminded how not ready my glutes and hamstrings were to be running these kinds of hills. I had no intentions of running this thing balls to the wall, in fact, I think running hilly trails like I would a road race would be absolutely miserable. Your heart race sky rockets, your muscles start burning, and frankly it's not maintainable. So I took the steep inclines easy, but steady and pushed it a bit faster on the flat(ish) sections. 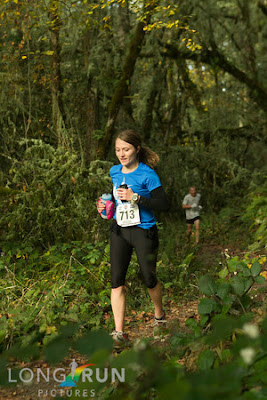 Thank you Long Run Pictures for some great race photos!

By mile 7, I was definitely feeling fatigued, so I loved hitting that last mile, which was pretty much all downhill. I was flying down the trails. It's kind of my specialty (still working on flying up them). 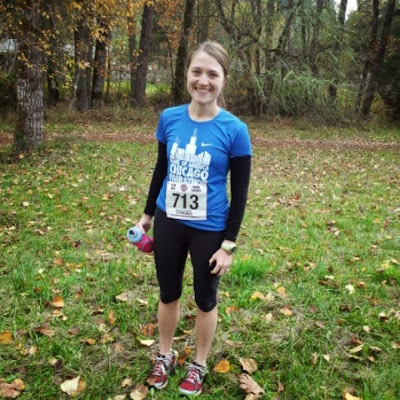 Pinning your bib on straight is overrated

For good measure and a little cool down, the manfriend and I jogged an easy mile afterward. The manfriend ran pretty strong and would have finished about 10 min ahead of me, but he accidentally took a wrong turn, running an extra .5 mile or so near the end (dang!). He finished in 1:23:16, 7th of 30 males.

Afterward, we stuck around for some free post race goodies while prizes were awarded: Grizzlies granola, Qdoba rice, bean and pork bowl, and Planktown beer. Nicely done, Eclectic Edge Racing! Another great thing about this race was that I only had to pay $10 as I had $20 race bucks to use that I had won at the Lucky Clover 10K (had to dance an Irish jig to earn my prize).

Moral of the story: must. run. more. hillz. more. often!

Other fun reading:
Small Town Runner's recap of Autumn Trails (It's always fun to see a fellow blogger in little ole Eugene!)
60 Below Zero - My youngest brother Max's blog about his time in Antarctica (he just got there about a week ago and will be working at the South Pole until the end of January)
Email Post
Labels: Autumn Trails Eugene race recap Ridgeline Trail trail run

Unknown said…
I so enjoyed seeing you and Mr manfriend/husband! But, I'm jealous your photos turned out beautifully for both of you :)

Lisa from Lisa's Yarns said…
Wow! Way to go on your time - I think that is really awesome for a hilly course like that! And you look so cute in all of your race photos!!
November 15, 2013 at 4:46 AM 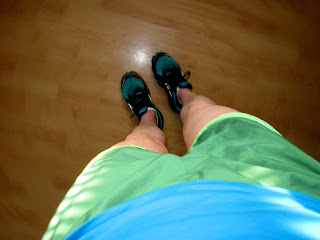