Hi friends! I'm starting to recap pregnancy #2 with you. Over the next few weeks I'll be posting these to get us caught up to current day. This post was written a few days after we found out we were pregnant and I am now 21 weeks along.

Four weeks in. I think. I never understand how they count pregnancy weeks seeing as how they start from first day of your last period. Clearly you conceive 1-2 weeks later. Anyway...

So we knew we wanted to start trying as we were ready to have another kiddo. I always imagined I would have 2, maybe 3 kids. But because we got pregnant so quickly the first time, we wanted to really be ready when we tried for a second. Mentally, I'd been ready for another baby for 6-9 months, but we were finally ready to commit.

And sure enough, it happened pretty quickly again, which left me somehow a little shocked. I knew it was possible, but didn't really believe it would happen that way again. After all, I'm three years older than I was when I got pregnant with Henry and not so much a spring chicken (I'll turn 35 in January).

BUT, it did! At first, I was excited. And then I was sort of in shock and almost regret thinking "Maybe we should have waited? We do have this wedding coming up. It would have been fun to really be able to celebrate with our friends."

But the fact is, there is always something. Always a social event, a reason that would seem good enough to wait another month (or five).

And then one night I thought to myself how fun Henry is now at two years old and how we're finally sort of able to get away on occasion for a date night. And how I could, if I wanted, go to yoga class or a running group on a weeknight. Or Pete could go out for a guys' night. And yet, we're going to trade that all in for months upon months of broken sleep? 😭 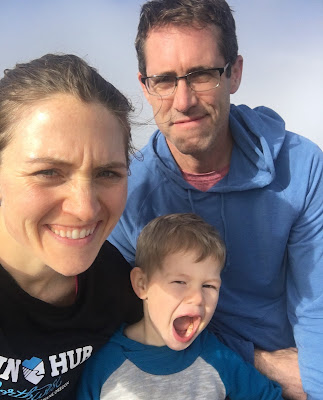 I'll admit that as much as we've both dreamt about a baby #2, I felt my body flood with sheer panic of entering that twilight zone again.

And because my head was already in a bad place, I thought about how much harder it will be to get back to where I'm at now with my body. Goodbye, midsection.

But the fact is, despite all my hesitations and worries, this baby is so wanted. I feel tremendously lucky to have been able to get pregnant twice now as I know it's a struggle for so many people out there. So many women and families struggle with infertility and/or miscarriages and that doesn't fall lightly on me.

Work: If I'm being honest, I know that some of this fear is rooted in the fact that I feel like I'm not contributing financially what I could be. (Update: things have changed quite a lot in that arena and I am now working full time and Pete is home with H and looking for a new job. Oh how things change!)

Around 4-6 weeks pregnant, I was going through an interview process, which was a bit of a trip. Not to mention, trying to find something that fit and looked professional was a challenge as I was thicker through the midsection. 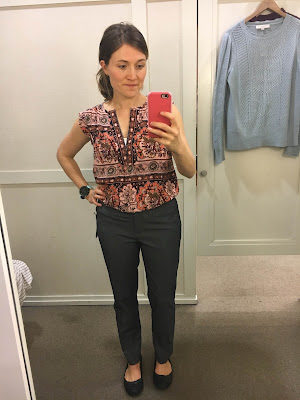 I didn't end up getting the job, but it was a confidence booster to go through the process and be one of two finalists. In my career, I have done very little interviewing, so it was a good personal challenge for me.

And on the other hand, I feel incredibly lucky to have had these last 2+ years home with Henry to take care of him and form such a special relationship. These 2.5 years have been honestly the most valuable and meaningful years of my life.

How I'm feeling: It's honestly hard to remember just how I felt with Henry, but I'd say I feel worse than I did with him. Most days, I feel sick about half the day. And it's tough being around friends and family members who you don't want to tell just yet and then feel like complete garbage inside. There's a lot of grin and bear it.

What I'm eating: What makes me feel less nauseous is drinking water/tea, eating a snack (preferably crackers) and taking deep breaths. I'm able to eat plenty of veggies and fruits, but sometimes I do just have to shovel it in for the nutrition. It doesn't necessarily sound good to me to eat a salad these days.

Bump? No one else would probably notice a thing, but I can tell that my belly just wants to be pooched out more. And I've noticed that since I found out that I was pregnant, I'm just naturally not holding in my core like I would normally.

What I'm wearing: All my regular clothes feel just fine at this point. 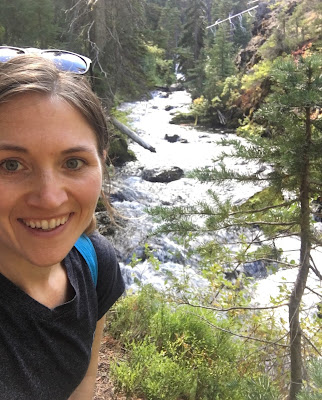 Hike past Tumalo Falls outside Bend, OR

Exercise: Well, I rolled my ankle on a run/hike while I was on a solo trip in Bend (to be recapped on the blog soon) and it's still swollen almost two weeks later, so I've only ran twice since then. Otherwise, I'm doing some indoor strength and HIIT workouts (SarahFit), a little yoga, and I rode the bike with Henry in the bike trailer today. Pete and I are registered for a half marathon in 3 weeks, so I'm getting a little nervous that I may have to drop down to the 7 miler.

Spoiler: We didn't race that trail half marathon because my ankle had been so bad I couldn't really run more than 2-3 miles and it didn't seem safe. Plus, going to my brother and sister-in-law's Friendsgiving sounded like a lot more fun!

So, there you have it. Four weeks in was a bit of a trip mentally. I definitely rode the roller coaster of emotions between terrified and excited.

Happy Monday! I hope your week is off to a good start. I have today off, so will be heading out for a little stroller walk in one of my favorite spots today and then hopefully some chores and computer work around the house.

Lisa from Lisa's Yarns said…
The week count is weird to me, too. I found out I was pregnant when I was 5.5 weeks along. I stopped taking bc when we got back from Hawaii but I thought it would take forever for my cycle to come back because when I went off bc for my hip surgery in 2016, over 6 weeks went by without a cycle. So when I didn't get my period in June I just thought I hadn't ovulated yet. Then the weekend after the 4th of July I decided to take a pregnancy test just to make sure I wasn't pregnant. I HIGHLY doubted I would be as pre-bc, I had THE LONGEST cycles. Like 40+ days. But shockingly, I was pregnant! It is hard to keep that news a secret so I told my sister and a couple of my closest friends and we told my parents a couple of weeks later when I was around 7 weeks as I wanted to tell them in person and wouldn't be seeing them again until September. Then we spread the news to more of our close friends and Phil's mom after our 9 week ultrasound and waited until I was about 16 weeks to post about it on social media. It's weird to keep such a huge thing secret but we didn't want to tell many people until we were sure it was viable, especially with all the bleeding I had from weeks 7-11.

I'm so happy for you guys but I can understand how you feel some anxiety since you know what's coming. My best friend just had a baby in late January and all through the pregnancy I've been like - 'when can this be over' but she's been ok with being pregnant because she knew how painful labor was and how much work it is to have a newborn... I still think I am going to much prefer the newborn phase to being pregnant since this has been a tough pregnancy for me but I know our lives are going to completely change!
February 5, 2018 at 12:21 PM

Amber said…
Aw I could totally see how it will be hard to go back to that baby stage when Henry has just gotten out of it. Just think about all the sweet newborn cuddles, they really are the best!! <3
February 13, 2018 at 9:19 PM