What Surprised Me Most About Life with a One Year Old

Three posts a week. Well, I'm not quite doing that, but just saying that goal out loud has reminded me to get back here more often. So, let's get down to business.

What's surprised me most about life with a one year old:

He can walk and mostly understands what I'm talking about, but that doesn't mean his baby stage is gone. There are still plenty of days where he wants to be held for a good portion and cries from teething, being tired or just feeling clingy in general. And when I work in the store on Sundays, he is definitely ready for me to be home after 6-7 hours.

My arms are probably the strongest they've ever been. No, I'm not using dumbbells on the regular, nor do I have a ripped upper body, but strong it is! Hello, holding a 25+ lb toddler while doing many other things (making coffee, prepping dinner, doing laundry) leads to strength naturally.

As a parent, fourteen months is quite different than twelve months of age, so when strangers in the grocery store ask how old he is, despite my better judgement, I give Henry's age in months rather than saying "Oh, he's a little over one." 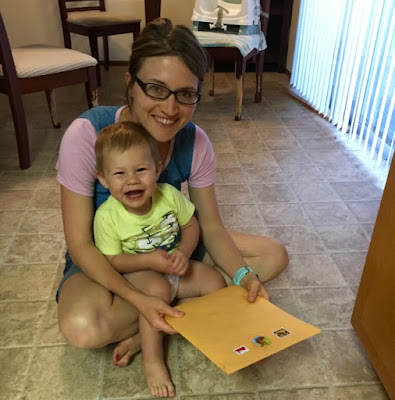 He understands and is capable of so much more than I ever expect. He will follow commands or go get something I'm talking about frequently. I love it when I tell him we're going to go on a walk and he goes to get his shoes from the front door.

He likes to help out. He really gets a kick out of putting clothes into the laundry basket. Unfortunately, these are usually the folded, clean clothes from my drawers. Henry also is really into what I'm cooking or baking and would like to help stir and such, but he's not quite old enough. I can see us getting one of those safety stools for him in the next year or so.

He is funny on a regular basis. Things he does that surprise and crack me up: says "Cheers" (in his own way of course) and likes to cheers our carrots, shakes his head vigorously to mimic the penguin in his book, insists on holding something (book, baby doll, beach ball, etc) 90% of the time while he's nursing, pretends to cough when Pete or I cough or sneeze (and thinks it's the funniest thing ever).

It's impossible to keep your kid protected from the sun during summer unless they're wearing long sleeves and pants around the clock. He even likes it when I put sunblock on him, but still has plenty of sun exposure from our outdoor activities. It's frustrating, but it is what it is. 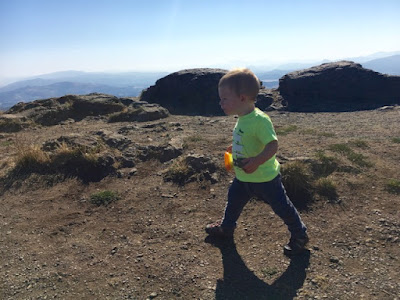 Baby on a mission

I never thought it would be easier to make friends as a result of being a mom than it would be doing almost anything else. Athletics has definitely connected to me to a lot of people, but in terms of strong friendships that I try to keep up with regularly, the connection of parenthood seems to make the friendship side of things easier. There are so many things you can commiserate over whether or not your kids or interests are similar. Plus, there's the whole kiddo schedule. Basically, we don't leave the house after 6:00 p.m. 95% of the time.

I didn't expect it would take him over a year to really start saying "mama." Sure, he used to babble "mamamamama," but it wasn't until a week ago or so that he really started saying it on purpose. He's been saying "dada" on purpose now for many months.

And finally, I didn't expect each stage to be more exciting than the one before. Yes, mobility and independence comes with their own challenges, but having a spirited, interactive little toddler has been so much fun.

So, that's it for now. I didn't really have any idea what having a one year old would be like (let's be honest, when you think about having a baby, you primarily focus on that infant stage), but so far it's awesome.

Lisa from Lisa's Yarns said…
Don't feel bad about not posting 3 times a week! I rarely post 3 times in a week and I don't have a busy toddler!! :)

I can see how your arms are stronger than ever. I remember reading once that mom's develop great arms because the baby gets heavier so you are increasing the weight you are lifting gradually and you are holding them so much!

I love all of the stages kids go through but I just things get better and better when they are more independent and can interact with you more and show you their personalities. It sounds like you've got a health, happy 14-month old!!
August 23, 2016 at 9:15 AM

Leigh said…
I hear you on the stronger arms comment! My arms and back are also more tired- especially when she only wants me to hold her. Amelia loves to flip through books and babbles while she flips- it sounds like she is reading to herself and it's so cute! It's crazy how much they start to understand and pick up at this age
August 23, 2016 at 11:46 AM

Amber said…
It's crazy how much Henry has grown! He definitely looks like a little boy now and not a baby! I can imagine your arms would be quite strong carrying him around :) Obviously I don't have first hand experience but with my friends kids the toddler stage is just SO FUN! They are so cute and hilarious at that age. But a lot of work too I'm sure :)
August 25, 2016 at 1:14 PM