It's true what they say: Home IS where the heart is.

When I first moved in with Pete almost six years ago, I honestly didn't like this little house. It was a man's house with blah decorations and paint colors I disliked. And it was in a neighborhood that didn't always feel safe.

But slowly, things changed. The neighborhood turned around as some key folks moved out and new residents moved in. The manfriend did a lot of work to landscape the front yard and built two raised garden beds where I could plant tomatoes and a few other veggies. And on the interior, we slowly made our way painting almost all of the rooms, replacing doors, decluttering and arranging the rooms to our liking.

And then, in an effort to look toward the future and wanting a bit more storage, space and flexibility, we decided to put the house on the market. For several years I admittedly didn't like the house much, then a year or so I began to really feel like it was our home and when we put it on the market, I realized I loved this little place.

And now, as we get ready to sell it, I can't help but want to hold on to this space that now feels cozy, homey, clean and ours.

As I laid in bed unable to sleep last night, all I could think about was not wanting to leave this place, my familiar running routes and our home. But I know deep down that one of the big reasons it finally feels like home is because it's Henry's first home and our first home as a family of three. 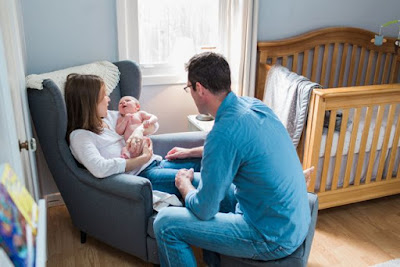 I'm reminding myself that home is wherever we are and that as we move on to a rental, which we will be carefully selecting, a new place can feel like home too. Big change is something I've never been fond of, so part of me is likely scared for what's to come (and let's be honest, packing). But I know that with the manfriend and our little guy by my side, it will be just fine.
Email Post
Labels: family home life

Lisa from Lisa's Yarns said…
I can understand why you have an attachment to your house since you made so many memories there as a couple and with Henry. There's a lot of sentimentality attached to that house. But I know you'll get through this move and find a new place that you love. It just might take some time to adjust.

When I decided to rent out my condo that I own in the suburbs and move into the building I live in now, I remember being so excited about the move but then when the day came to give the keys to my tenant, it was very bittersweet. I remember sitting on the floor of my empty condo and feeling all the feelings. I hated the location and was so ready to move on but there's something special about that place because I bought it on my own and made a lot of memories there.

I take this means that someone made an offer that you accepted? I hope so as I think having that process behind you would be huge!
January 14, 2016 at 4:56 AM

Jessica Jarrell said…
Did you guys sell the house? I can definitely understand how you are feeling. The hubby's work is doing re-orgainzation, which means we may move in the next couple of years. I'll be so sad to leave this little house, the first one the hubby and I ever built together. But you are right, home is where the heart is. I know, as long as I have the hubby and the dogs, wherever we live will feel like home :-)

By the way, that last pic of the three of you is heartwarming. What a great family picture! Have a great day Lauren!
January 14, 2016 at 5:30 AM

Amber said…
Aw that totally makes sense you would be feeling sentimental about it! It's the house you went home to after your wedding and the house you brought your new baby boy home too. Definitely makes sense you'd be feeling sad about leaving. I think that's how I will feel when we eventually move out of our townhouse since it's our first home that we bought together. Plus we've already lived here 5 years and plan to be here another 3-5 more! That's a long time in one home.

Wherever you guys end up will definitely feel like home eventually too though! Especially with your little family by your side.
January 14, 2016 at 8:16 PM

Leigh said…
We've played with the idea of moving to another house, but haven't found anything we absolutely love. We like our house, but it's on a bus route, so would like something not on a busy road. One day. Hope your house sells quickly and you find a rental you love!
January 15, 2016 at 8:11 PM

Heather @ Dietitian on the Run said…
Aw, this is so sweet. I can't yet imagine that feeling of bringing the newest, most loved, member of your family "home", or how that turns a house into a home in your heart, but I can say that if this past year has taught me anything it's that home is definitely a feeling. No doubt you'll walk in the doorway to a new place and feel that right away, and then for the rest of the days you're there. Until you move on to the next chapter :)
January 16, 2016 at 10:59 AM

Kyria @ Travel Spot said…
Wow, this is a big move for you guys! I think now is a great time to sell, at least it is in my neck of the woods. Sometimes you have to make the decision that is best for you brain rather than the one for your heart. I think that just like you said, a home is where you are and where your loved ones are! When I was shopping for houses, I did my best to just look at the bottom line and to try to be more clinical about my decision, rather than falling in love with a house that I may not get, or paying way to much for it in order to have it!
January 24, 2016 at 7:00 PM