Because it's been a while.

As you may remember, the manfriend and I are both training for the Chicago Marathon on October 13. Overall, training has gone well. I managed to fit in a few 40 mile weeks prior to our wedding.

During our wedding week, I was lucky to fit in 16 miles and the following week bump it back up to a 38'er. The challenge however, is that my long runs haven't been what they probably should be. 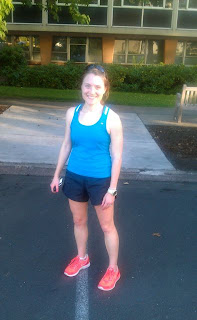 When I look at the few training plans I've loosely followed in the past, my long runs should be up to 16-17 miles. However, I barely eeked out a 12 miler last week and had to walk a few times. It was painful. The only thing that forced me to hit 12 was the fact that my reward was brunch with the manfriend at the Original House of Pancakes afterward.

And none of the other 10-12 milers I have completed have felt necessarily stellar. I suppose that's part of getting back into the long runs.

As I looked over my various training plans, I was also reminded that I need to really settle on a rest day that fits best in my week and likely one day that's an easier run with a little cross training thrown in. Yoga, I'm getting back on the train!

Experimenting with Heat
We've had some pretty hot weeks in Eugene recently, which has been nice, but also a challenge for running. Because the weather on marathon day could literally be anything (hot, cold, perfect running weather), I figure it can't hurt to run both in the morning when it's cool and after work when it's 90-95!

What's also interesting, is that after a week or so of running in hot weather I noticed that 90 degrees didn't feel that bad anymore.

Weaknesses
Not much has changed in that realm. I should be working a lot harder at glute strength (a challenge for most runners whose quads are stronger than their back side), stretching more and foam rolling. The weaknesses come very apparent in those last few miles of a long run: the hamstrings remind me just how tight they are and the right I.T. band and leg start talking to me.

Today, I settled on 15 miles for our long run. The manfriend isn't necessarily following a training plan, but he likes to do his long runs with me. We ran a four mile loop on the river path and then headed out Pre's Trail to one of my favorite spots, Dorris Ranch. The last few miles were painful, but not as bad as last week.

After running a few errands (Trader Joe's and REI), we enjoyed a little kiddie pool foot soak in the back yard. 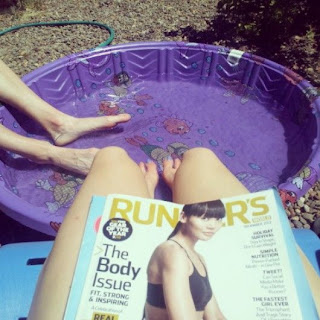 Running with the Manfriend
For runs longer than five miles, I find it hard to run with him because his long legs and athleticism make him faster than me. On a long run, I want to set the pace and not worry about keeping up with someone else, especially when sh*t hits the fan.

The way we've compromised on the long runs is that we'll start the run together with the same intended route and after a mile or so, he'll go ahead. I have a feeling this may not work for all long runs as I do typically like to do a few 20 milers where I basically run all over the city with no intended route.

When the distance is really far, sometimes it helps mentally to not know where you're going and JUST RUN.

Volunteering
I think I've volunteered for a race maybe one or two other times (Sorry, I just prefer the racing side). But the manfriend and I both decided to volunteer to help at the Rolf Prima Tri at the Grove triathlon on Saturday and had a great time.

We both volunteered on the bike portion. He drove the car for the sprint racers and I directed the sprint and olympic distance athletes the correct directions at one of the intersections.

It was one of those mornings that reminded me that we kinda live in a pretty place. 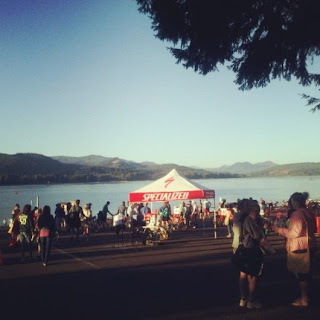 Seen just down from where I was standing on the course... 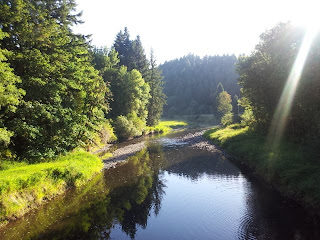 It also showed me that volunteering can be rewarding too and is something I will consider doing more often.

On another semi comical note, the manfriend got roped into running Cascade Lakes Relay this coming weekend on an ULTRA team - hello 30+ miles in less than 24 hours on no sleep! It will be a ton of fun, but I'm guessing a bit painful too. Good luck, buddy!

Do you prefer to do your long runs solo or with a friend? Highlight of your weekend?
Email Post
Labels: Cascade Lakes Relay marathon training Tri at the Grove triathlon weekending it

Tasha Malcolm said…
I definitely prefer to run solo. The highlight of my week was my freaking back spasms going away. Got hit hard on Wednesday night and was flat on my back until today. Definitely not fun, especially when I also have an ultra relay coming up in a few weeks. You will have to let me know how your adventure goes!
July 28, 2013 at 9:45 PM

Lisa from Lisa's Yarns said…
I preferred doing my long runs with my running club in Minneapolis. There were so many different paces, I could always find someone who ran at my pace. It made the miles fly by to have someone to chat with along the way!

I am glad training is going pretty well for both of you so far! The heat you have had is strange, but I guess race day has been in the 90s more often than it hasn't the last 5 years it seems, so I guess you'll be ready for heat on race day!

I was able to start taking long walks last week, so that is progress. It's baby steps for me but I am trying to not overdo it as I just do not want to end up back in the boot.
July 29, 2013 at 3:54 AM

Amber said…
I have done ALL my ultra training with friends and I honestly don't think I would have been able to do it without them. Something about heading into the trails for hours and hours by myself does not seem appealing but throw a few friends and their dogs in the mix and it becomes fun!
July 29, 2013 at 9:44 AM

Redhead Running said…
Spike is definitely faster than me but we like to run together sometimes so we compromise by having him run with me on his easier days or my faster days, then neither of us have to worry about affecting the other's pace. I get him to slow down when he's supposed to and he challenges me to run faster when I'm supposed to. (You know, when I'm actually running)

Long runs we would run the first two miles together (so he doesn't go too fast right out of the gate) and then part ways.

Sounds like you've been busy, don't stress about the long runs too much, you have an excellent base, you just need to start building up. Plenty of time!
July 29, 2013 at 11:43 AM

Paul said…
Congrats on your wedding!

Running with a friend always tricky unless you are both just noodling around on a trail or otherwise going at a comfortable pace for both of you.