Considering I'm recovering from a knee/IT band/glute issue and this is I believe the 2nd 10K I've ever run, I think I did okay.

When I showed up to the race finish (where we parked in order to get shuttled to the start) there was a super long line and it was almost 7:30 AM, the time the last shuttle was supposed to leave. YIKES. Cutting it close, Sass. So I hopped in this humungo line and didn't board the bus 'til 7:55 (race start: 8 AM). Luckily, they held the start for us late comers, sort of. As our bus pulled up to the start they shot the gun and off went the speedy gonzales'.

These are the moments when I really appreciate the chip timing. I didn't cross the start line until 1 min 45 sec after the gun went off so yay for the chip. The weather was great, the race was nice and along the river and through downtown Portland, ending at the Old Spaghetti Factory. The best part about starting out behind the pack is that I was pretty much passing people a good portion of the way. In addition, shorter races tend to bring out those who are pretty fresh to running and don't understand the whole pacing concept. It was definitely a mental boost to be able to pass people even when running what I consider to be slow for my usual "fast" pace.

Post race celebrations included a great live band, free pasta and salad, Jamba Juice and two free pints of Widmer beer (because that's what every runner wants at 9 AM)! I had my pasta, Jamba and water and headed back to the bro's apartment. Beer's great, but at 9 AM, no thanks unless I'm tailgating or in Vegas. 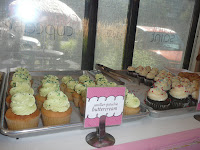 We then went shopping, had thai food, checked out some awesome vintage shops, and headed to Saint Cupcake! Awesome? Oh yes. I had a "dot sized" toasted coconut and a vegan chocolate chocolate. Yummers. 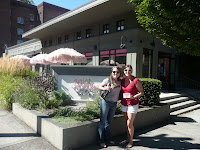 In full cupcake coma, I said goodbye to my brother and his girlfriend and headed on my merry way down the freeway. Weekend = success.
Email Post
Labels: running weekending it

Laura said…
Thanks for the link, and great job at the race!

Those cupcakes look incredible... I think if my race yesterday had been a cupcake run instead of a bagel run, my diet would have been done for :)
September 8, 2008 at 4:07 AM