I feel like I owed you guys an update on the sleep situation in our world after my last post of our awful nine month sleep. Thankfully, things have turned around for the better.

First, on the sleeping arrangements. Greyson had been in a normal crib in our room since birth pretty much, save for the first eight weeks or so in a Rock n Play next to our bed. It seemed to get harder as he got older because he seemed to be sleeping a bit lighter. Pete and I would nearly tip toe into the bedroom at night to go to sleep. 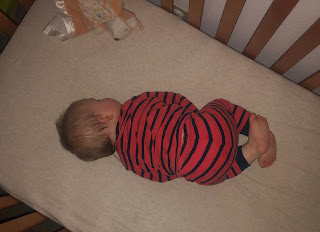 When sleep got really bad, I finally took the night light out of the room to see if having it near pitch black would help. I don't think it made a difference.

Finally, for all of our sanity, we decided to move Greyson's crib into Henry's room. It seemed like a good decision because 1) Henry sleeps like a rock 2) Greyson wouldn't wake up because he knew I was right there every time he stirred (i.e. non stop nursing) 3) Henry was excited about sharing a room with his little brother and 4) it honestly couldn't get any worse than it already had been. So, we gave it a shot! 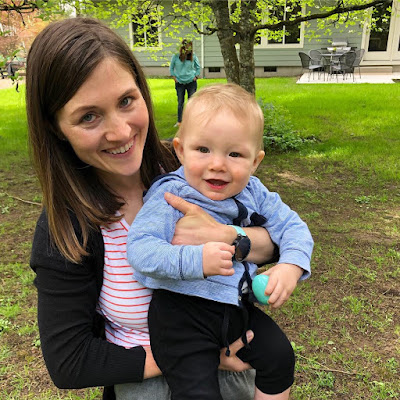 I can't say for sure whether it's a developmental thing or moving him into Henry's room or both, but Greyson now wakes up usually twice a night around 1:30/2 a.m. and 4:30 a.m. to nurse. While I'd love to be sleeping through the night, it is a HUGE improvement from a month or two ago.

Some days, he decides to be up for the day at 5/5:30 a.m., but usually he's not getting up until around 6:30 or 7, which is manageable. Last week, our mornings were comical because Henry decided to wake up around 5 a.m. a few times and consequently wake up Greyson, too! Pete and I groggily woke up to the sounds of Greyson laughing at Henry's antics. BUT, at least they were both happy!

How we do bedtime
Now that both boys are going to sleep in the same room, we have adjusted our evening routine. About half the time, we do a bath after dinner for both boys. Greyson is first and then Henry gets in a few minutes later so Greyson doesn't have to deal with Henry stealing all the toys his entire bath. ;) 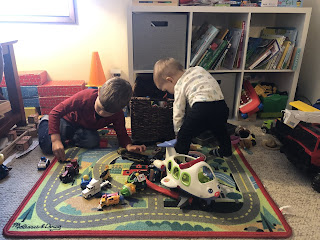 After we do PJs, brush teeth and sleep sack (for G), we try to read one short book (G isn't always up for it) and then Pete takes Henry into the living room or our room to read books while I take Greyson into the boys' room to nurse and put him down. About five minutes after I've put him down, Pete and Henry head back to the room and quietly sing a few songs before Henry is snoring.

All that to say, it's working for us and I feel like a much saner and more rested person. The next sleep issue I hope we have to deal with is weaning the night nursings. Because I nursed H until 2, I know that G will likely continue to wake up at night until we cut those out by having Pete go in to soothe him in the middle of the night. It worked pretty easily at 18 months with H, so we will probably do the same thing this time around. 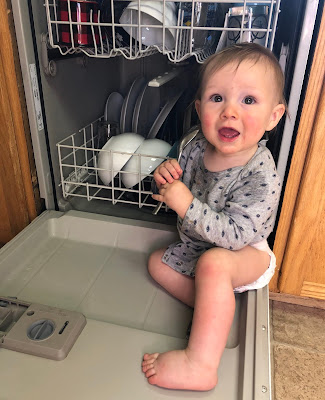 And finally, a bit on nursing. I mentioned in my last post that nursing had gotten pretty painful with baby's sharp teething teeth. Well, it continued to get worse until I got a puncture (think of a tooth shaped hole punch on my chest). I finally went to the lactation consultant who I think was a bit shocked to see how bad it was. She recommended I use APNO after every nursing session and come back in if it didn't heal. Spoiler alert: it still hasn't healed and I also have a sore on the other side now too.

My guess is they don't see many moms after the newborn stage. I didn't have any issues with nursing like this the first time around, so that's different. I tried not nursing on that side for a few weeks and only pumping, which helped it almost heal, but then G started demanding to nurse on that side again.

There's not much to say on it, other than I see why people quit nursing. It sometimes feels like brutality to the mom. I have had many sessions lately where I'm curling my toes, wincing and cursing inside from the pain. It's getting better, but still not healed yet. Sigh. Let's just say, I'm going to need to invest in some good bras when this is all over with.

Edited to add: Greyson now has some kind of little virus because he's had a 103F temperature on and off the last few nights, which has resulted in some pretty poor night sleep and a cranky babe. 😭 And on the nursing front, I'm feeling desperate to heal this puncture, so back to trying to only pump on the right side. Oh, the joys!

Well, I think that's all for now. I've been up since 4:30 today and the sun is coming up, so it's time for a little run before a day with the kiddos. Have a great one!

Amber said…
I'm so glad to hear moving G into H's room has been working out OK with sleep!

That nursing situation sounds AWFUL! I never had that experience at all. We nursed until 14 months but even after Olivia got teeth around 8 months or so she only bit me once or twice but never punctured me! The curling your toes and wincing from the pain sounds pretty awful. I hope you are able to figure out a solution to that soon.