Nine marathons in the books (I had to go back and count). It's been two weeks now since I finished the Eugene Marathon and I'm already starting to think about what's next. But for now, let's get to the race recap.

The Before
For all intense purposes, race week was what it was intended to be in terms of running. My mileage was significantly lighter and only one run with the team on Tuesday night that included a few miles at race pace and a few 1 minute pick-ups.  I walked during the stroller run and I skipped my strength training. All good.

Believe me, that hasn't always been the case. There've been marathons where I showed up sore to the start line because I wouldn't give up strength training.

But there were other aspects of race week that weren't what they should have been. My race week sleep was crap. Coincidentally, Henry had popped his last pacifier on Sunday or Monday of that week, so we decided "what the heck, let's try weaning him cold turkey!"

That, plus the little guy got a cold midweek resulted in a few nights of rough sleep where I was up with him for an hour or so in the middle of the night. And on other nights where I should have been in bed by 9:00 p.m., I just wasn't. And then we had a busy weekend on Friday and Saturday at the running store and our race expo booth.

To top it all off, when I got home from work on Saturday afternoon, Henry had decided to climb fall out of his crib for the first time during nap and proceeded not to nap. This led to an afternoon and evening of tantrum city and us throwing in the towel and giving him the paci back. 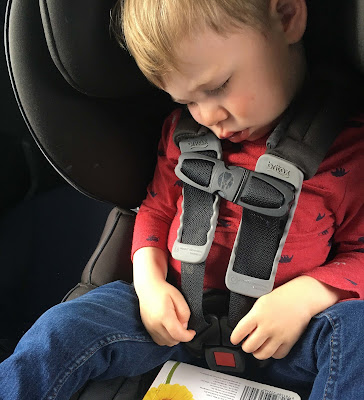 By Saturday night, my throat was a bit raw and sore and I was tired. I did my best to put my compression socks on and lay with my legs up the wall for 20 minutes that night and got to bed around 10:30. 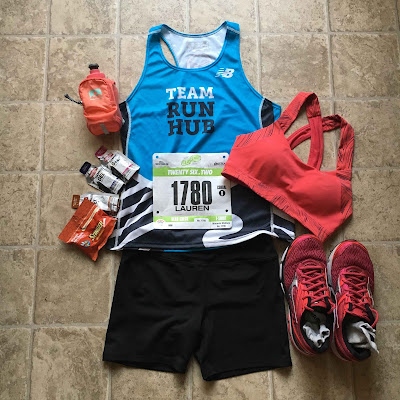 Sunday morning, my throat didn't feel any worse for wear and decided that a sore throat wouldn't bring me down. I felt pretty good otherwise, so planned to just ignore it. 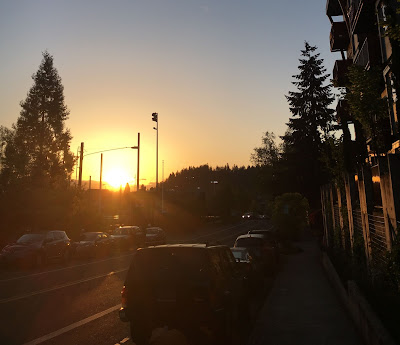 Race morning sunrise. Not too shabby.

The During
I did my prerace nutrition and routine at home with a little Jasyoga race day meditation and warm up, UCAN superstarch drink, peanut butter toast and banana. Around 5:45 a.m. I drove to the race to meet up with the team for warm ups at 6:15 and then the 7:00 a.m. start. 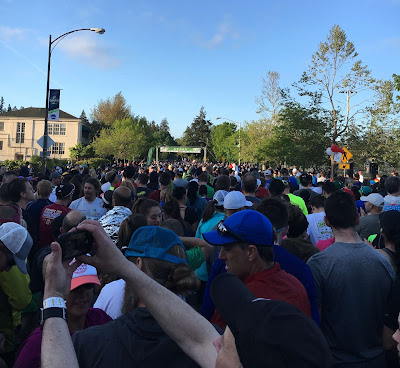 Feeling pretty good and ready to go, with perfect chilly, but sunny conditions (it was about 38F at the start), we were off. 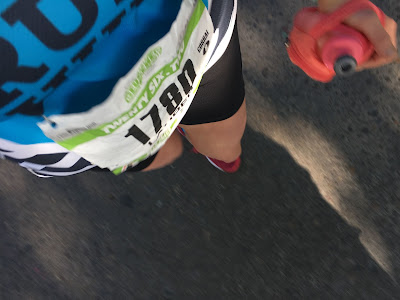 Miles 9-10, I noticed that it just started feeling a little harder to keep up my current pace. I tried to tell myself to just relax, but I also didn't want to back off the pace. At this point in the race, the half marathoners turn and the marathoners keep on going into Springfield where the course gets pretty sparse with spectators. Mile splits 9-10: 8:53, 8:34 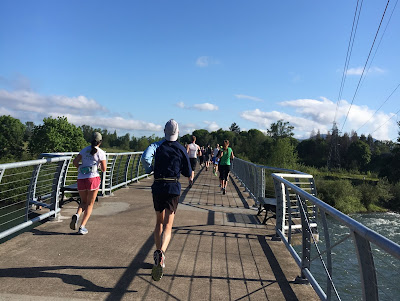 Somewhere between mile 10-13, out of nowhere it seemed, my right knee started having shooting pains from what felt like a tight IT band tugging on it with every stride. It sort of caught me off guard because I hadn't dealt with any IT band issues through training, only hip tightness (but also on the right side).

Miles 19-26.2
As you might know, the race in a marathon doesn't really start until mile 20 where your reserves are getting low, your brain feels a bit fuzzy and your legs are just plain tired. For me, the last six miles were all about maintaining a decent pace and willing myself not to walk. Mile splits 19-21: 9:20, 9:27, 9:54

But, I told myself things like at mile 22, you can't walk until mile 23 and then you can walk for a minute. The few times I stopped to walk, it was only for 15-20 seconds. When all was said and done, I probably walked 1-2 minutes total of the race. And oddly enough, somewhere in the last few miles, I noticed my shooting knee pain dissipate. 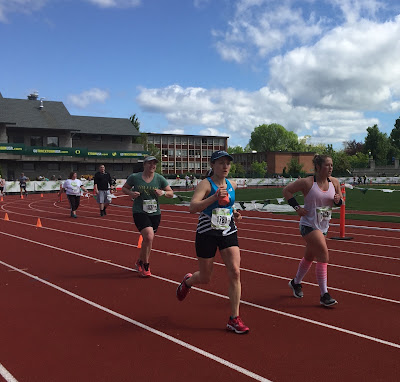 Focused on getting to the line

The Aftermath
No matter the time on the clock, it always hurts a bit to have an outcome that's not indicative of the work you put into something. As I hobbled around the finish area, I said more than once to others that I think I might be retired from the marathon.

And yet, the next day, as I started to feel some of that pain ease up, I thought "Maybe if I could fix this IT band issue, I could run another one in a few months and better my time?" Ha. Typical marathoner status.

When I did some mental prep and meditation for this race, I found that the reason I wanted a strong outcome from this race was to show myself that I could come back after three years of pregnancy, caring for an infant and now toddler around the clock and still run strong. That somehow I hadn't lost all of my running mojo despite living on less sleep and having a changed body that's a little more soft (and ahem, saggy), widened hips, etc.

But if I'm being honest, this race taught me a few things. Race week sleep matters, but sometimes can't be protected. #kids And, maybe it's okay if my story ISN'T one of "I had a baby and I came back 10x stronger!". The fact is, we can't always perform at our best if we're lacking in other areas. Bottom line is, I still managed to train for and run a marathon.

What Could I Have Done Differently?
In the past two weeks I've reflected on the race a bit more and wondered what I could have done differently to prevent the knee issue or simply be stronger overall. The tendon on my outer left ankle (opposite of the right knee) has been swollen and very painful these past two weeks and I assume it's a result of altering my stride during the race because of the knee pain.

Besides more sleep and less time on my feet, I think I could have started a bit slower, aiming for 9:00 pace to really let myself warm up slowly for the first 3-6 miles. But who knows if that would have helped or not.

Beyond that, I noticed that the major differences between this training cycle and in 2012-2013 (when I was running my fastest) was that I haven't been taking yoga classes regularly or doing the HIIT training I was doing a lot of back then. And, in 2012 I was running and racing a LOT.

It's ultimately a lack of time. It's rare that I'm able to make it to a class these days, but there's still a lot I can do at home. As I'm stepping back in mileage now, I'll be adding both of these back into my regular routine to improve my overall strength and work on imbalances. Despite how the race went for me, I'm really happy I joined the Run Hub training team for this cycle as it kept me focused and motivated to work hard every week. And, it was really nice to feel like part of a team during those Tuesday night workouts.

So there you have it! As far as what's next, I'm looking forward to running some shorter races this summer and maybe training for a half marathon in the fall.

What's on your summer plan for racing or fitness? Happy Monday!

Leigh said…
Congratulations on another marathon Lauren! You should be proud of yourself for training while working and raising a toddler. It's not easy!
May 23, 2017 at 11:27 AM

Amber said…
Congrats Lauren! I know it's hard when you don't achieve your A goal or even B goal - but finishing a marathon in itself is so impressive, and especially when you are caring for a toddler and dealing with sleep issues on top of everything else!

This summer I want to just workout as much as I can. I saw my doctor yesterday and he OK'ed me to start adding running back in if I want to (I haven't ran since November) but I'm not sure I will yet. I have added back in strength/HIIT workouts through Fitness Blender since I started feeling better and it's felt amazing to be working out regularly again after a long stretch of feeling terrible. But my goal for this summer is just basically to keep moving my body daily as I get bigger and bigger!
May 24, 2017 at 12:38 PM

Lisa from Lisa's Yarns said…
It's tough to not reach your A goal but I am still impressed by what you achieved. Training for and running a marathon when you work and have a young child is TOUGH. So give yourself a huge pat on the back for finishing with a great time (one I'm envious of as the sub-4 marathon alluded me). I felt extreme disappointment after my last marathon as I also worked so hard but with time, I came to accept it and be proud of myself for finishing and PR'ing. I was on the struggle bus for the last 3 miles, most of which are uphill. I do wonder what I could do on a flatter course, but I'll have to just always wonder because my marathon days are over. I'm prone to a labrel tear on my right side as the one of the left was caused by repetitive use combined with a misshapen ball hip joint. The doctor said since it's anatomical, I likely have the same malformation on the right side so I don't want to push it and risk another tear/surgery. The surgery itself was not bad at all but the recovery was horrible - esp being on crutched!

As far as summer fitness plans, I am doing a sprint tri in mid-August and a half marathon in early Sept. I haven't ran much lately as I was so focused on going to barre as much as I could since I had a 3 month unlimited membership. Now I"m ready to focus on running, swimming and biking, though!!
June 1, 2017 at 6:54 PM