Sleeping Through the Night, or Not!

I remember thinking as I got into bed one evening "Well, it only took us 18 months, but finally, we are sleeping through the night, knock on wood." Two months later, I'm sort of surprised to say that's no longer the case. My hope is that Henry's going through a developmental leap that is going to wrap up shortly, but I don't really know.

In the last three weeks, we've seen everything from 5 or 6:00 a.m. wake up calls to wake ups at 1:30, 2:30, or 3:30 that last for hours. One of us usually goes in, changes his diaper if it's really wet and that might be the reason he's not sleeping, gives him his paci and tries to sing to him and settle him back down. But there is no settling really. He wants to be up, turn on the light, read books, etc.

A few nights, I'll admit that I wearily agreed, turned on his lamp, and barely comprehended any of the words on the pages. Sometimes we just flipped pages and I didn't say a word. After a few books, he usually started to seem sleepy and ask for milk. {These days, he nurses about twice a day, but sometimes 3 during these middle of the night shenanigans.} 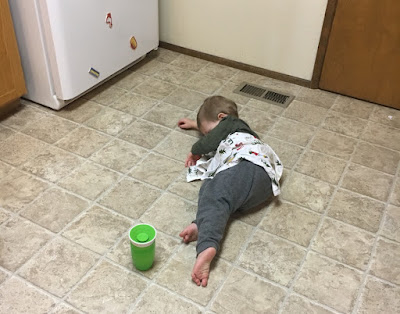 After putting him back in the crib and falling back into bed myself, he is quiet for maybe 5-10 minutes and then boom! wide awake. Kicking and talking in his crib. On the worst night, I was up from 2:30-6:00 a.m. before falling back asleep for another 90 minutes. Whew.

I don't know when it's going to end or what the solution is, but I'm hoping it's right around the corner because these headaches and this exhaustion are unpleasant.

Anyway, this is just a bit of what's going on here.

On the positive front, when he's awake, Henry is usually super happy. Running, working on his jumping, talking up a storm, obsessed with construction equipment, playing music, singing songs, etc. 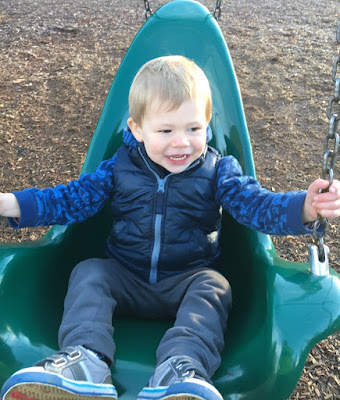 We're doing our first round of swim lessons at the YMCA and while he isn't really into the technical aspects (blowing bubbles, reaching his arms, or kicking too much), he really likes jumping off the edge of the pool, doing the songs, going down the slide (when he gets the courage), and sitting in the warm/not-so-hot tub afterward with all the other little kiddos. 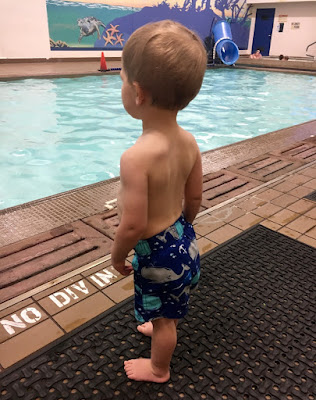 He's also starting to tolerate the stroller better on our weekly group stroller runs. For a while, it was frustrating and I get it, he's an active kid who doesn't want to be strapped down. But it's just nice not to have to stop several times on a 4 mile run.


Happy Friday, friends! Do you have any fun plans for the weekend?

We have a family day today, so are planning to go to the trampoline park and who knows what else. Tonight, I am meeting up with an old friend and then tomorrow is a baby shower for my sister-in-law!

lyk said…
I hear you! My son is 18 months now. Was sleeping through the night beautifully, then all of a sudden, in January, started waking up at 3 or 4 am, wide awake, wanting to play. It was a really tough season, felt like we were moving backwards. However, I am happy to report, after about 5 weeks, he just went back to sleeping through the night. We did do a little sleep training, letting him cry for 10-20 min. at a time, which may or may not have helped, who knows. I hope your sweet son makes the transition soon. I'm confident he will. So many stages, growth spurts and sleep regressions their first couple years.
February 17, 2017 at 12:07 PM

Lisa from Lisa's Yarns said…
Ugh, I hope that this sleeping regression ends soon. That just sounds so difficult! Sleep deprivation is so God awful. When my insomnia was at its worst, I felt so terrible and zombie-like. I hope this passes soon. It's hard to not know why it's happening. I think my friend Becky is going through the same thing with her son, Parker. He's maybe a month older than Henry?

We have had a fun weekend! On Friday night we went to an engagement dinner celebration that was hosted by one of Phil's college friends. Yesterday I went to barre class and then got some wedding to do's done and then we had a friend over and grilled as it was unseasonably warm! Today will be more low key. I have a personal trainer session at noon and am hoping to relax more as I was on my feet nearly all day yesterday. We both have tomorrow off, too!
February 19, 2017 at 7:35 AM

Amber said…
Oh gosh that sounds terrible! I'm so sorry to hear that Henry is having such a major sleep regression. Totally makes sense you're so tired. Amazing you are still managing marathon training through all of this. My friend Jen's kids sleep SOOOO well. She read some sort of book that helped her with their sleeping. I think she did sleep training with them as well though, which I know is not for every parent! I will find out what book she read and let you know.
February 23, 2017 at 11:41 AM