Marathon Training, Ready or Not

Happy 2017! I hope the new year is off to a good start for you and your family.

The last time I ran a marathon was October of 2013, the Chicago Marathon. I had to check my records to confirm that. The last big race I trained for was the McKenzie River Trail 50K in September of 2014. 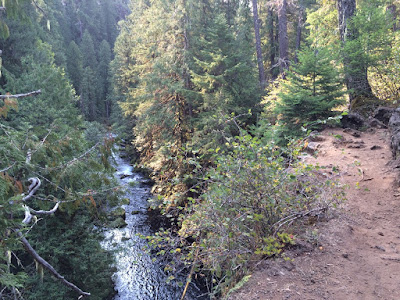 Between pregnancy and having/raising Henry (who's now 19 months old), that's a long period of time I've been out of the long distance training game. I don't feel I have something to prove, but I've also felt like I'm not quite done with the marathon.

So, I've joined Run Hub's training program for this spring's Eugene Marathon. It's a flat course, it will be easy logistically to run (because it's in my home town) and takes place in early May, so will hopefully be decent running weather. And, the manfriend and I are signed up to run the Peterson Ridge Rumble 20 miler together in April, so I'll be doubly inspired to fit in the mileage.

We've had some wacky weather around here, so just getting out for a run has been more challenging than usual... 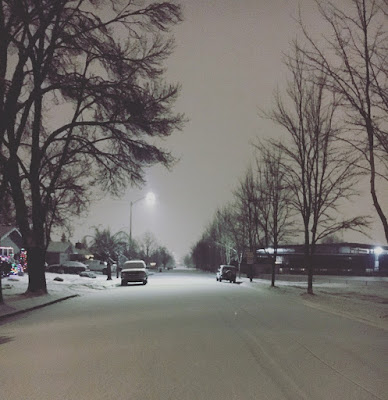 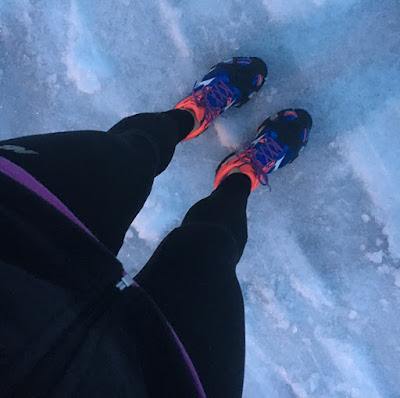 I'll admit that the biggest reason I've signed up to train for the race is that the coach is four-time Olympic Trials Marathon qualifier Brett Ely. I figure it's a cool opportunity to have a personalized training plan (a first for me!) and the extra motivation a coach and team offer. While I don't currently have goals to PR, I'm simply hoping to train hard and enjoy the process of getting stronger. 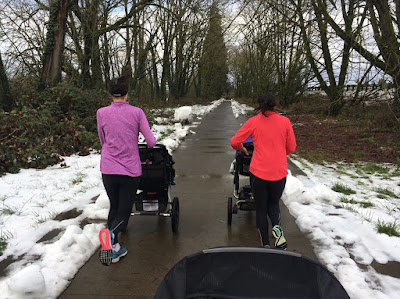 Weekly stroller run from the store with a few friends. Not easy.

Fitting in runs is one thing, but fitting in hard workouts and long runs is another ball game when you have a little one. Last night was the Thursday speed workout, which happens to take place at the track right near our house. In order to make the workout, I had dinner ready and on the counter waiting for the manfriend. Then I bundled up H and put him in the jogging stroller for the warm up mile. As soon as Pete came home, he met me at the track and I handed over the stroller to hop in just as the workout started.

I joined a group that was a bit faster than me, so I lagged behind a few seconds, but they definitely pushed me to give it my all. I don't think there was a 400m where I actually ran my 5K pace. Most were quite a bit faster.

It was all I could do to hang on for 3 sets and then decided to cool down for 1.5 miles. Typically, I'll hang in for the longer version of the workout, but last night was cold (25F or so) and I haven't been doing much speed work, so I'm trying to be smart about it.

Speaking of being smart, this morning I went out for a 20 minute eeeeasy recovery run (~60-90 sec/mile slower than goal race pace). I don't know, but I have a hunch I'm going to need to start paying attention more to my pace on the easy days when the training plan gets underway on January 31!

And in New Years chatter, is anyone else still trying to recover from the holidays food bonanza? I still have a happy little belly thanks to those Christmas cookies and chocolate I was given or baked on my own free will. :) 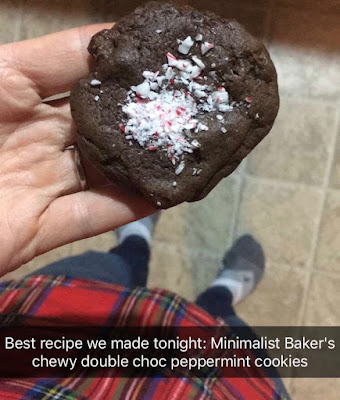 Random things that boggle my mind:

missris said…
"How do people with full time jobs have time to go shopping, cook meals, take care of their kids and clean their house?" I wonder about this ALL THE TIME. I don't have a kid and I barely have time to do all of that!
January 14, 2017 at 2:03 PM

Lisa from Lisa's Yarns said…
That is exciting that you are training for another marathon! And it will be great to train with a group that is coached by such an awesome athlete. I can see how it's super hard to fit it in in between being a momma to a busy little guy.

I also do not know how parents who work full time do things like grocery stop, meal prep, clean, work out, etc. I struggle to do all of that and I'm not a parent! I guess something has to fall to the weigh side and for many it seems like it's working out. Which is sad because that is so important for your health, both physically and mentally. So kudos to you for finding a way to stay active!!!
January 14, 2017 at 3:33 PM

Elizabeth said…
Congrats on starting training again! I'd been seeing some of your running outings on IG and was impressed with how well you're keeping on with the cold! It'll be neat to follow your progress. Is there a way to arrange a regular sitter or maybe exchange so you can get those long runs in?

And truthfully I am wondering the same....I'm day dreaming about post delivery running (& traveling), but have no idea how I'm going to take care of the kid's needs, the dogs' needs, work needs, my needs, etc and what is idealistic versus realistic. Life is drastically changing....I keep reminding myself to soak up these quieter last couple months...to read as many books as I can, relish long showers, enjoy cooking, and appreciating the freedom to get just the dogs and I out for some fun.....
January 15, 2017 at 4:00 PM

Amber said…
That is awesome that you are going to train for another marathon! Good for you!!

Leigh said…
That's awesome that you are going to train for another marathon! I miss running fast and hard :(

How do people with full time jobs have time to go shopping, cook meals, take care of their kids and clean their house? - the key is being organized and having a partner that helps! We do our grocery shopping on Sundays (usually one of us goes while the other is home with A). We will pick out meals on Saturday or Sunday morning that we are going to have for the following week. Helps us not make a million grocery store trips. I will admit that Brian does most of the cooking in our house, which I love! While he is cooking, I am either feeding Amelia, playing with her or getting started on the dishes. In terms of cleaning, we probably don't do it as often as we should, but it usually gets done on the weekend. Amelia wanted to "help" a lot now, so I usually give her some paper towel to wipe things down while I am cleaning the bathrooms. Our main floors get swept and cleaned while she is napping on the weekend
January 16, 2017 at 1:33 PM