20 miles of trail is a long way to run on hilly, occasionally rocky terrain at 3,000 ft elevation. This is not necessarily a new revelation, but one that I was reminded of on Sunday morning.


Oh sure, you've run 20 miles before. In fact, you've run THIS race before. You'll be fine on a few longer trail runs. You're totally going to beat your 2011 race time out of the water. Yeah...

We got to Bend (just about 20 min SE of Sisters, OR) Saturday afternoon in time for me to pick up my bib and check out the running store and then let the manfriend gear up for a little road ride back to Sisters where we'd be staying. 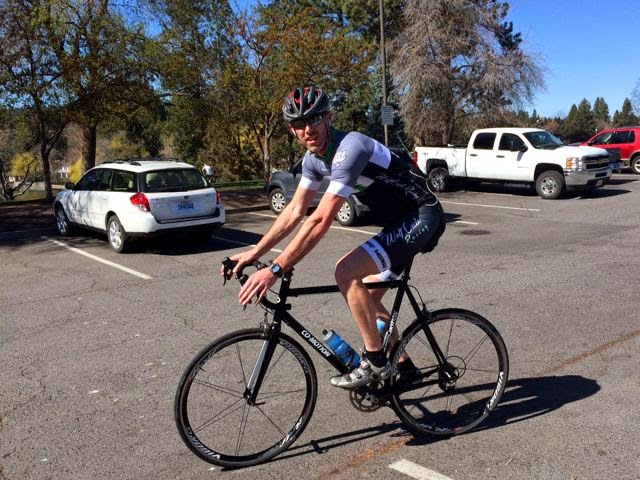 Saturday night we met my family for dinner at the nearby Three Creeks Brewing. I had a pear & walnut salad, a side of sweet potato fries and a beer as I had been eating carbs pretty much straight the last few days. 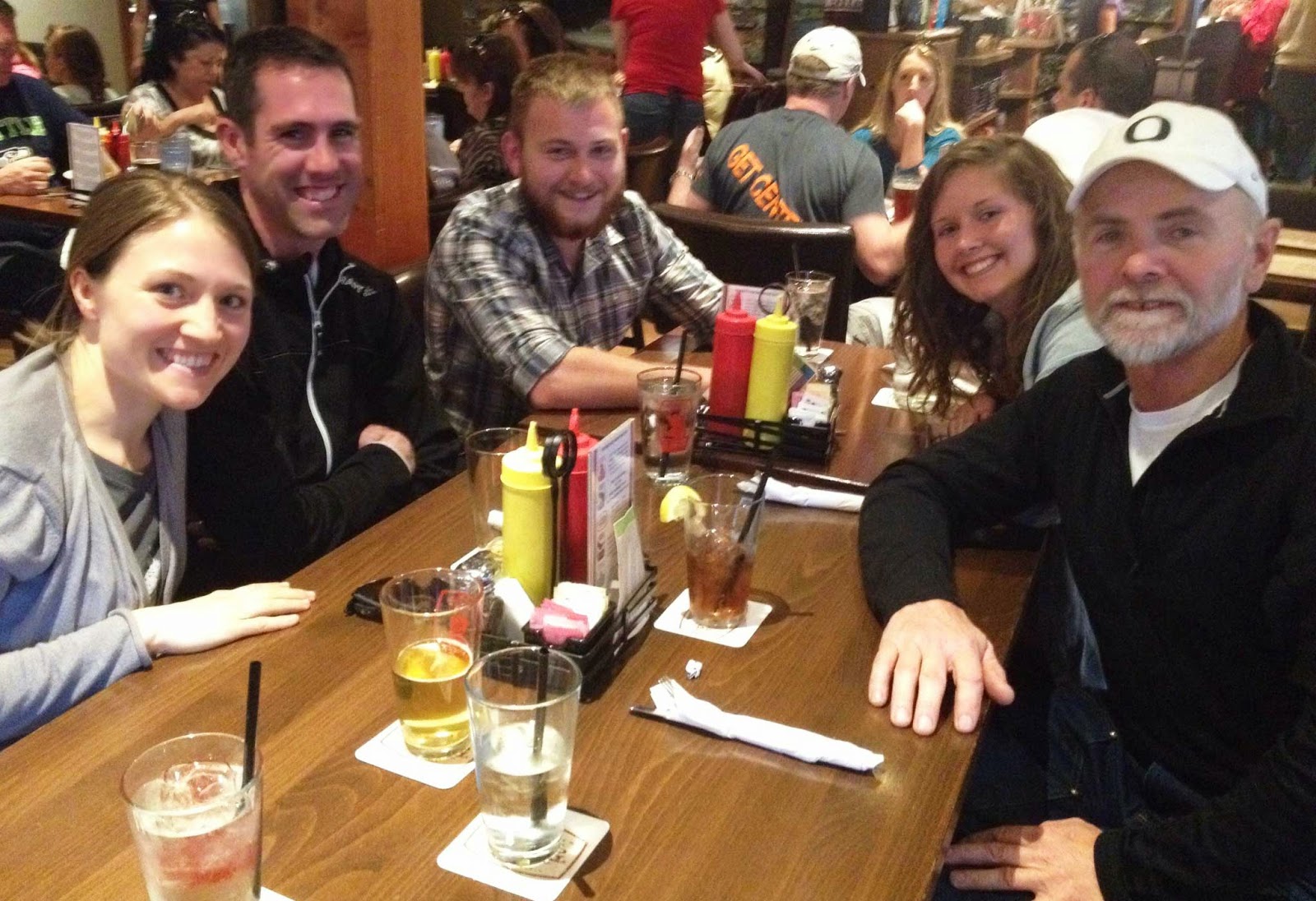 My parents decided to use their gift certificate for Five Pine Lodge that we gave them on our wedding weekend so they could come see the race and enjoy a weekend out of town. We opted to stay at a motel that allows dogs and is just a mile or so from the start of the race. While the bed was not comfy and Jonah Bell was up pacing the room every 20 minutes, it was convenient.

Sunday morning we left for the race about 40 minutes 'til GO time. I had picked up my race bib in Bend, OR on Saturday, so I just needed to use the restroom and hang out a bit before the race. This time I dressed much better - shorts, tank and a long sleeve (which I promptly threw at my dad around mile 2). 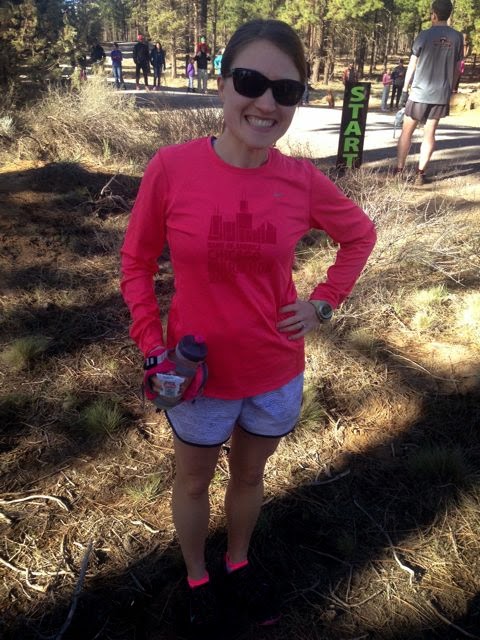 Finally, at 9 am, a few hundred of us (and about 75 dogs the race director said) lined up and we were off! The first two miles are dusty trail and then the next few are on a rocky road before veering off into another 12 or so miles of trail along the Peterson Ridge. 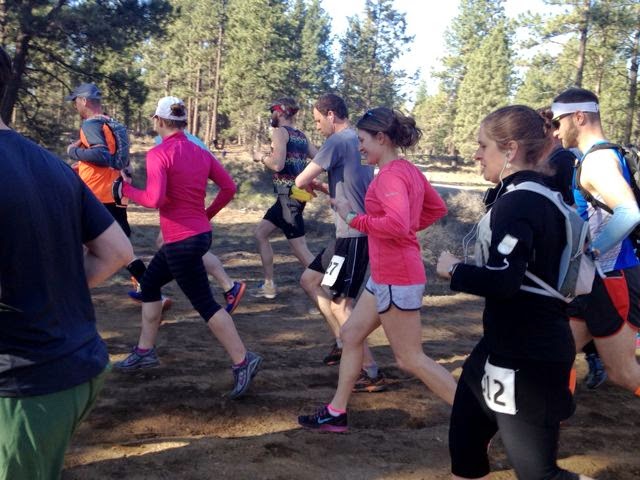 On the one hand, I loved how beautiful it was. Geez, is anything in Central Oregon not beautiful? Frankly, it's a major factor in why we got married there. I just love it.


But on the other hand, I did not love having to always be on the lookout for the next rock that would trip me. This happened in 2011 and it happened again in 2014. 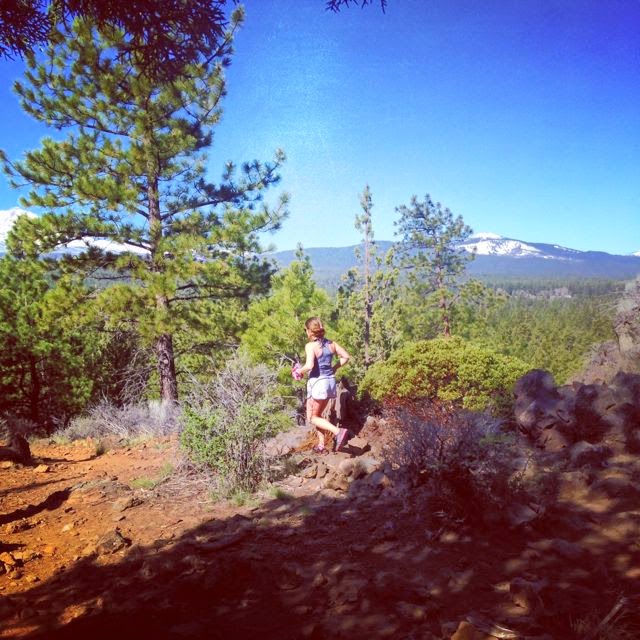 
Last time I fell twice and nearly fell a number of other times, this time I fell just once. Perhaps you could consider that an improvement??

The course meanders up and over the Peterson Ridge a number of times, which requires some short inclines and rocky sections that required walking, but mostly it consists of gentle flat(ish) trail.

The highlights (and a few lowlights):


Mile 7 I tripped so bad I fell and cut up my left leg decently. I tried to get off the trail so the folks behind me could continue on. Nothing like a bruised ego (leg) to force you to get up and get movin'.


The aid stations were just as good as I remember them. Trail races know how to do an aid station right. They had gummy bears, small PB&J's, goldfish, pretzels, peanuts, Oreos, boiled potatoes, orange slices, water and electrolyte. At the two aid stations where I grabbed stuff (I was carrying my own fuel/water), I had a handful of Goldfish and salted peanuts and a slice of orange. That combo tasted like gold, I tell ya. I didn't end up taking much fuel as I think I ate too much for breakfast and my stomach just didn't want much more.


There was a 40 miler (which Sweaty Emily ran) that started at 8 am so there were already runners on the trail. About halfway through, we started to see some folks (likely some 20 and some 40 milers) coming back toward us in a section that was supposed to be one way only, so it was clear that some folks got a bit lost. It is easy to do in these kinds of races with multiple distances, even when there are arrows and flags.

It was clear from the start that I overdid it on Saturday. As many races as I've run, you'd think I would have learned. I did an easy 3 miler and yoga on Saturday. I probably should have done none of that and been much better off, but I hate missing out on things I love. My glutes were sore from the get go, which makes running hills for 20 miles a little bit harder. Ha. I will learn... someday.


My cheering squad! My family (the manfriend, mom, dad, youngest bro and his gf) all came to cheer me on. It was really nice to have a whole cheering squad out there, even if I must have looked like a total wreck. I think they saw me at about six points throughout the race. I definitely felt a little bad about not doing so hot in the race with such a fan base. 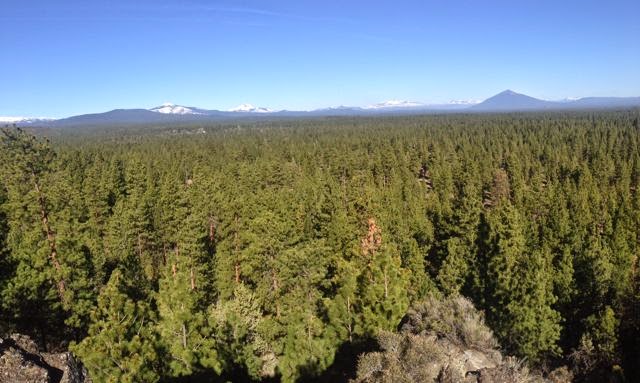 It was beautiful. I wish I had risked my iphone and just brought it on the run with me. Every time we crested the ridge, I took an imaginary photo of the snow covered peaks in front of me. It was friggin' gorgeous out there. A good reminder that even in those moments when everything is hurting, you are LUCKY to be running this damn thing. Amen.

The finish lineThe course was a lollipop, so we were dumped back onto the road and short trail section for the last four miles. I will tell you that the road was rough for me. In my mind, I was saying "you're going to pass so many people because you run roads all the time." But in reality, I was like "I'm so tired and starting to hyperventilate. I need to walk."

So yeah, I walked maybe 30 sec each a few times before the end of the race, something I HATE to do. But honestly, my breathing was outta control and it wasn't worth shaving off a minute of my already non PR. 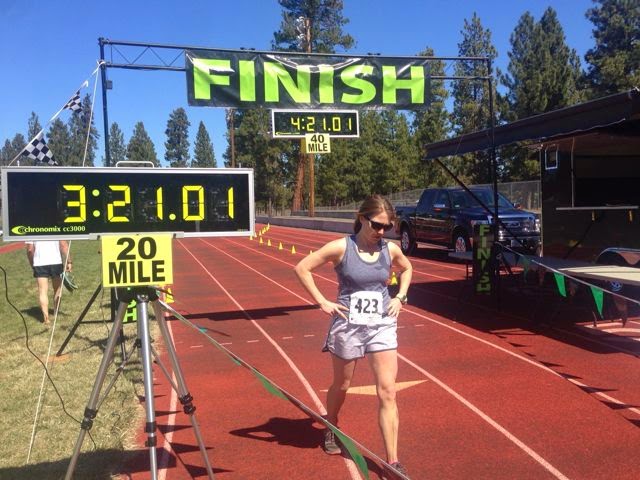 As I ran into the middle school track and finished the lap around the track, I was so relieved to be done. So tired and a little frustrated.

I took a few minutes to stretch and determine if I was going to throw up (I didn't) and then made my way to the aid station to get the grit cleaned out of my leg. 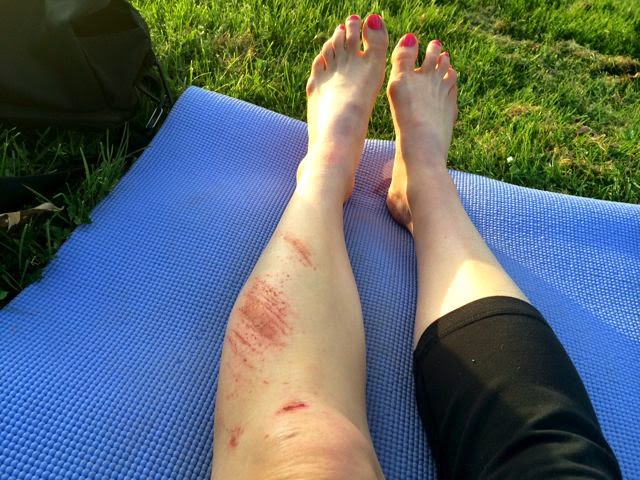 How I feel about it
This wasn't by any means my worst or most disappointing race, but it was a good reminder that running any distance is a challenge. Those 20 miles were hard for me and I wanted to be blazing past people I felt I was stronger than. But I also wasn't out there to win any medals and I enjoyed a beautiful course and a perfect day to be running outdoors.

Overall, it was a win, even if I was reminded that if you want to run fast on trails for long distances, welp, you better be training on them a lot more.

Anyway, I'm not the type to dwell on a less than spectacular race, so I'm moving on and learning from it. This week I'm focusing on recovery and some easy exercise over the next few days. I took a whole two days off from doing much of anything besides a little stretching.

How is your week going? Favorite thing to do during a recovery week?


Because it's worth repeating...
Even in the moments when everything is hurting, we are lucky to be doing this thing we're doing, whatever IT is. As I write this one year post Boston Marathon bombings, these words never rang more true.
Email Post
Labels: Central Oregon Peterson Ridge Rumble race recap race report trail running

Lisa from Lisa's Yarns said…
Sounds like it was a really challenging race but I think you should definitely be proud of your finish. You have a lot going on in your life right now and that stress can impact our training directly through not having as much time to run and indirectly because stress definitely wreaks havoc on our bodies. But all in all, I think you ran a strong race and I am glad there were more highlights than lowlights! And I hope your leg heels fast!!

My week has been... interesting. In a good way. Will fill you in when I have time to catch my breath and process everything. My favorite thing to do during a recovery week is yoga!
April 17, 2014 at 4:11 AM

Luna said…
So, let me understand: you did not train for this, and ended up running it a measy 10min slower than the previous race, for which you had trained???I think that's success!!I am going to run a 50k in two weeks, with scary (to me) altimetry, no much trainng as well, and i can tell you, i hope to do half as good as you did. And, what Lisa said is so true, you0re balancing out so many things, you should be PROUD of yourself!!Rest and realax now, hope the leg is ok!!
April 17, 2014 at 6:48 AM

Nilsa @ SoMi Speaks said…
I'm in awe of trail runners -- probably because I'm lucky to complete 20-road miles, let alone 20 miles with the added challenges of the trails. The fact you finished is impressive to me.

And, I love your perspective by the end of this post. You're so right - no matter how hard it is, we are lucky to be doing it - on countless levels. It'd be nice to learn that without the difficulties of the trail run, but I'm glad you see through to that conclusion anyway.
April 17, 2014 at 9:52 AM

Heather @ Dietitian on the Run said…
Oof - hills have taken over this month! I guess it's a given, with a trail race, but they can still surprise-and-delight (or, demoralize). :) You're tougher for toughing it out! Onward!
April 22, 2014 at 7:38 AM

Amber said…
That race looks so gorgeous - I should really organize a group of friends to road trip down and run it next year! I would love to do some trail running in Oregon.

Don't beat yourself up too much. I find that trail running especially is really dependent on the day. I can't have a strong trail race if I'm not feeling great that day. I usually go into trail races not really caring about getting a PR though because that's exactly the reason I love running trails - it's not so much about the time as it is about the beautiful scenery and friends!