Stepping back to almost two weeks ago...
So, about that time it snowed twice in one winter in Oregon. Growing up here, I know that this kind of weather is extremely rare, but even more rare to experience more than once a winter.

Thursday, February 6, we woke up to a dusting of snow, which quickly turned into a lot more snow. The sky just started dumping and wouldn't let up. And Friday, was much more of the same: dumping snow all day, schools closed (except the University) and people warned to stay home if they don't have to go anywhere.

Per the usual, I took Jonah on her morning walk on Friday and she loved romping around. 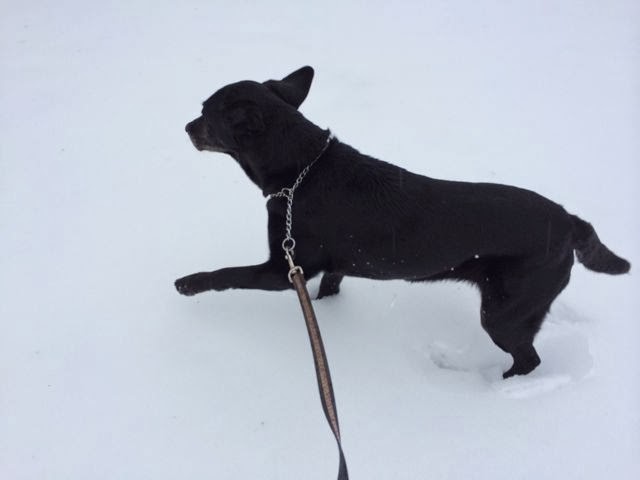 After dropping her off, I couldn't help but head out for my own snowy 20 minute jog before getting ready for work. It doesn't look like it, but the flakes were huge at this point and sort of blinding me as I ran along. 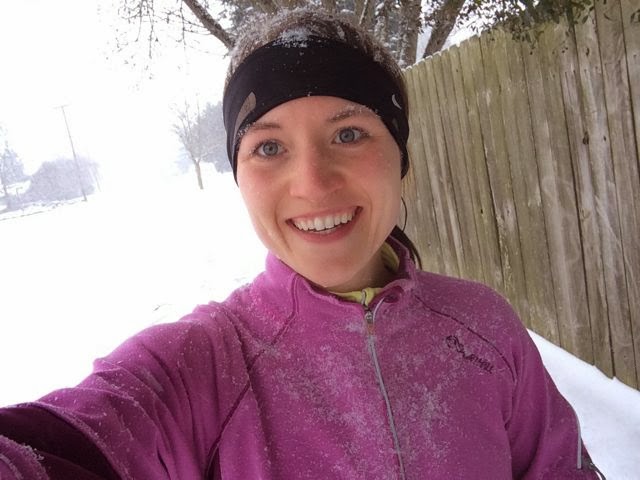 We had a late start at work, so I took my time heading into the office and pulled out the Sorels for the occasion. By some luck, I happened to purchase these this year not knowing I would actually need them in Eugene, not just at the mountain. 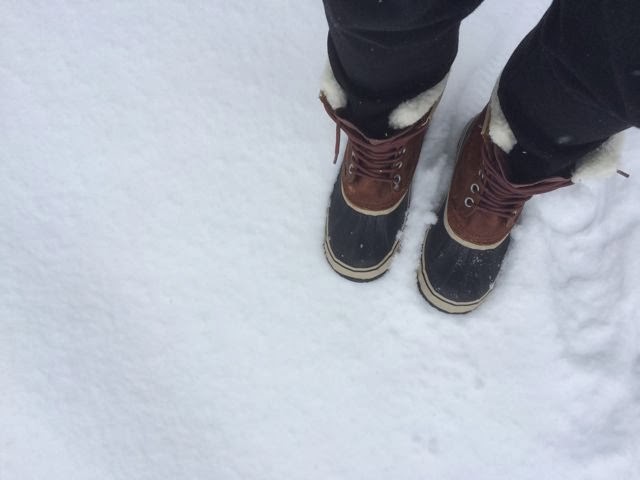 Snow day at the office meant chambray and black jeans for this chica. I did actually wear real shoes around the office, but wore the boots to and from the car. 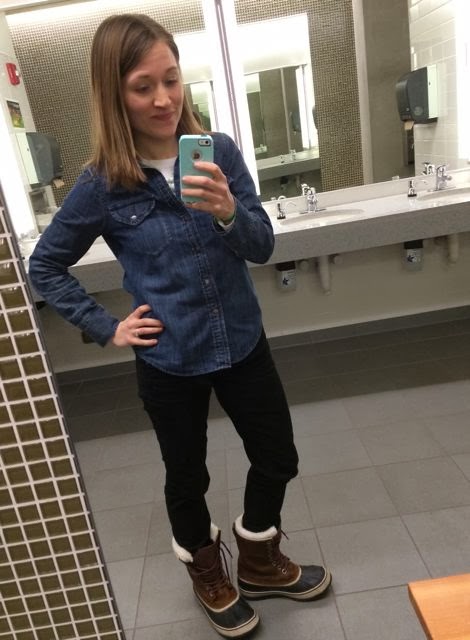 Friday, we were sent home early and I grabbed a pint of beer with a coworker. Not a bad way to end a snowy Friday!

Saturday, the manfriend joined Jonah Bell and I for our morning walk to look at the mess. 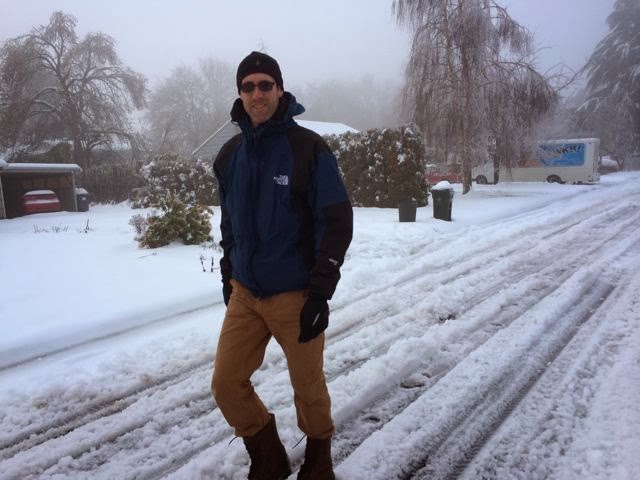 Shortly after, we ventured out on the roads for a little breakfast date, armed with boots and warm layers. 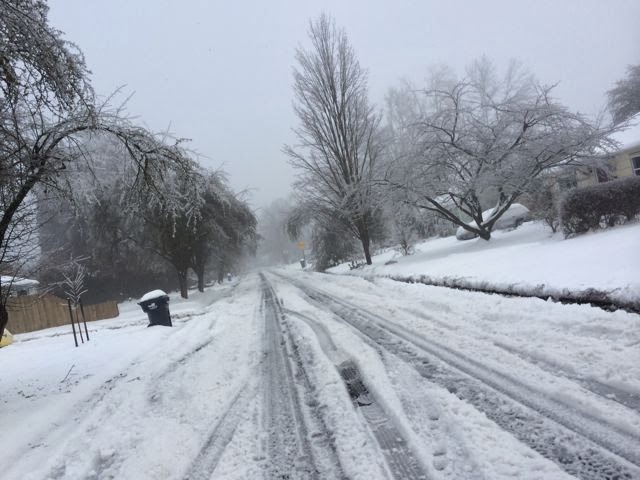 We parked about a mile from our destination downtown and happily trudged through the snow and muck for waffles at Off the Waffle. 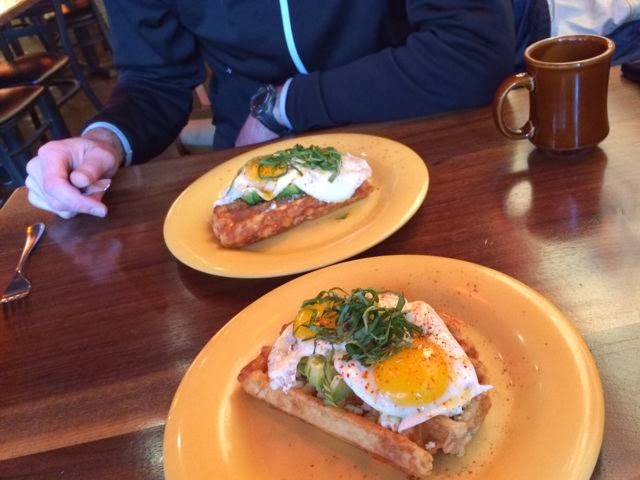 I present to you: Goat in the Headlights

Let me tell you, I would have walked five miles for this breakfast (although I would have needed two of them). I'm never straying from the Goat in the Headlights ever again. The liege waffle (sort of caramelized) has chevre, avocado, fresh basil, paprika and two eggs over easy on top. Yuuum.

Sunday, the roads were still a mess with the lack of snow plows, so I was going a bit stir crazy. I had done my share of spinning, Tone it Up, yoga flows, and Winter Shape Up workouts at home. Heck, I had even tried hitting up the local pool that has a tiny fitness area with a few treadmills, ellipticals and weights, but even they were closed.

So the manfriend dropped me off at the end of the one clear road that existed in our neighborhood. I'm pretty sure the only reason it was clear was for the fire trucks to get through as we have a fire station a few streets down.

Luckily, that road is about a mile long so I was able to run up and down it a few times, cranking out five miles in no time! A few people made comments to me with how impressed they were I was out running, basically meaning they thought I was crazy (we don't have too many exercisers around us).

Luckily, by Monday, the roads were pretty much clear for driving and life slowly returned to normal. That is, for those of us who didn't lose power.

We're now back to typical Oregon weather with regular rain showers and some short periods of clear skies. I'm really trying not to be a wimpy rain runner, but when we've had so little of it, it's hard to excited about heading out into the rain. I just don't wanna...

Jessica Jarrell said…
I love the chambray and black jeans. Actually, I love the outfit with the boots too. Call me a weirdo :)
February 20, 2014 at 3:29 AM

Kyria @ Travel Spot said…
That waffle looks delicious! I have not been to Eugene, but when I was in Portland I remember eating many a delicious breakfast. My conclusion: Oregon has good places to eat!
February 20, 2014 at 6:03 AM

Lisa from Lisa's Yarns said…
Yum, that waffle looks and sounds incredible! Brunch is one of my favorite meals to eat out and I love creative brunch options like that which mix sweet and savory.

That is crazy that you guys got so much snow. It has been a weird winter in alot of places it seems. We have had 2 snowfalls and the last one we got 8" which is a lot for Charlotte. I can obviously handle the snow being from the midwest but if I am going to live in the south, I'd like a mild, snow-free winter (well at least now that Christmas is over, I would have liked snow in December).
February 21, 2014 at 2:38 PM