Welp, winter term starts tomorrow. I haven't read the chapters I told myself I'd read just to freshen up, but oh well. I figure 10 weeks of studying and classes are enough stress that I don't need to start earlier than I have to.

I told you on Friday that the manfriend had something up his sleeve for my birthday. Well, he had made  dinner reservations at King Estate winery about 30 minutes out of town, which has a gorgeous facility, tasty wines and a nice restaurant.

Early last week he had told me to keep my Saturday evening free and be "dressed to impress" and ready to go by 4:45 p.m. You don't have to ask me twice!

My attempt at showing you my outfit {and my attempt at curling my hair}. Small things blog has the best hair tutorials. However, she can't help user error. ;) 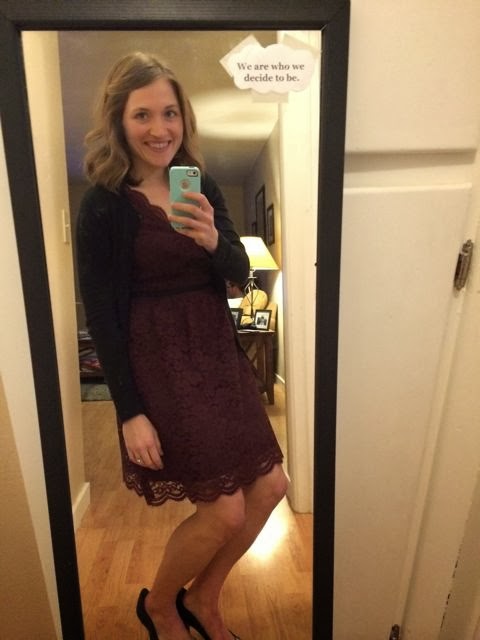 When we first sat down at King Estate, we ordered a cheese plate and a bottle of the 2011 Estate Pinot Noir. Honestly, I would go back and have the cheese plate just for me as my dinner. It was SO good.

All three cheeses were from Oregon and I believe the fruit and preserves were as well.

Next, we both ordered salads. I had the kale, pear, walnut salad, while the manfriend had the mesclun green salad. 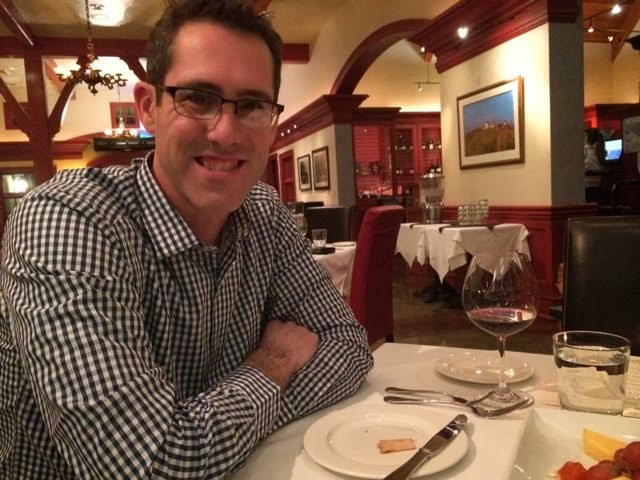 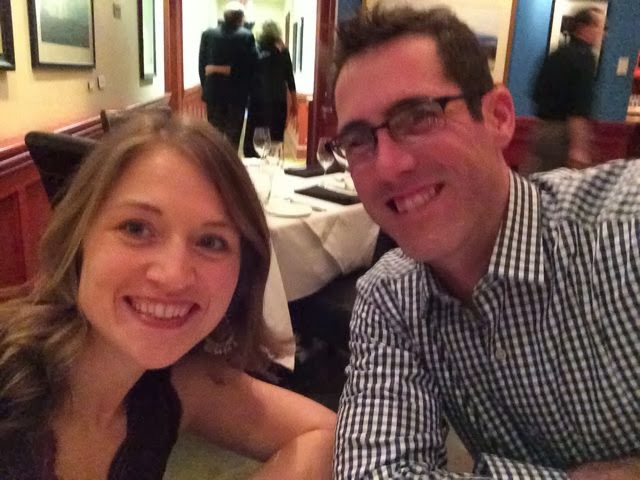 For dinner, the manfriend had the filet of beef with potatoes and Brussels sprouts, while I had the braised chicken in a sauce of pinot noir, veggies, pancetta and pasta. Next time, I'm definitely trying their burger. 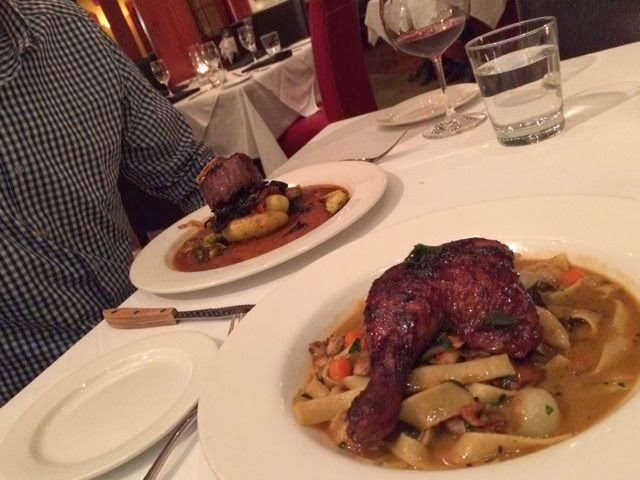 And finally, the molten chocolate cake with peppermint ice cream on top! #yum 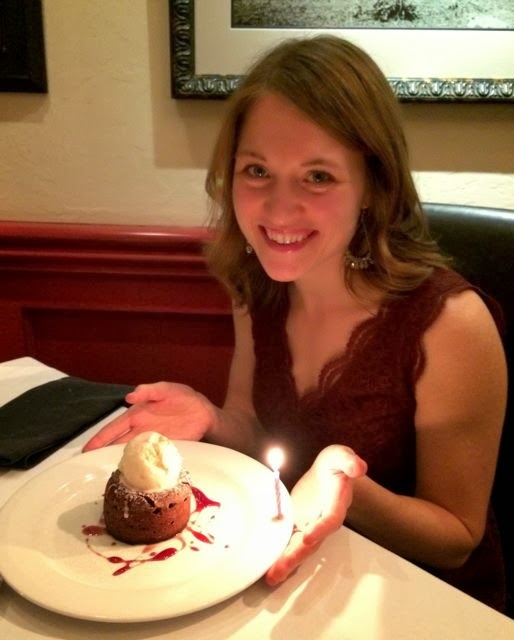 We came home pleasantly stuffed, but it was oh so worth it. We agreed that this was probably the best meal we've ever eaten. Thank you for the fun birthday surprise, manfriend!

Hardest workout {of the week}
After a few months of shorter mileage, a snow storm, and the holiday festivities, it had been a while since I had a really hard workout. Don't get me wrong, I believe we should have times in life where we go a little easier on ourselves - mentally & physically, but I was due for a challenge.

After yoga at Lindsey's this morning, I went searching for some sun {we've been fogged in lately} and some hilly miles on the Ridgeline Trail. 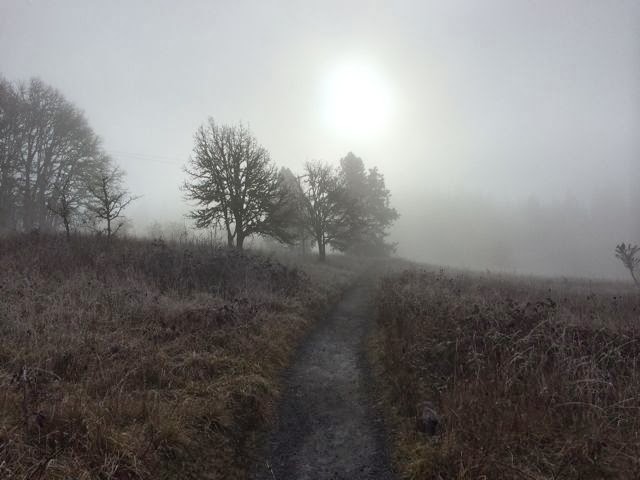 In seek of sun. Looks like it's there, just above the fog. 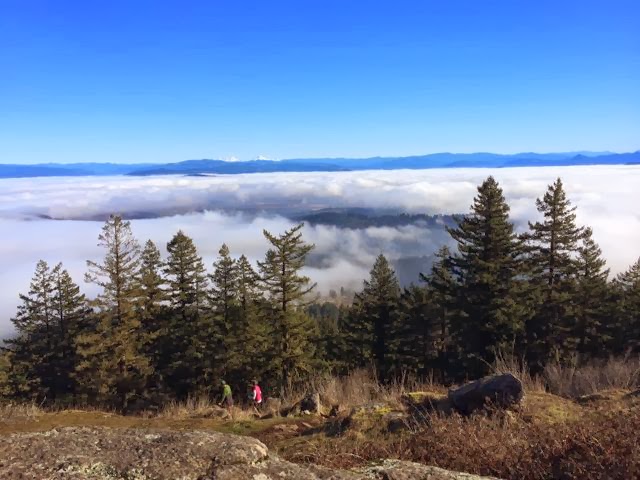 Four heart-pounding miles later, there it was. Bright, beautiful sunshine. It was chilly at the top, but I snapped a few photos and just stood there breathing in the fresh air and thinking about the year ahead. It's amazing how much nature is a place of peace and head clearing.

What I'm proud of {right now}

Egg over easy on top of Dave's Killer Bread toasted with yellow mustard and avocado smashed on top. Seriously, try it. I think Jenna of Eat Live Run gave me the idea in one of her posts. 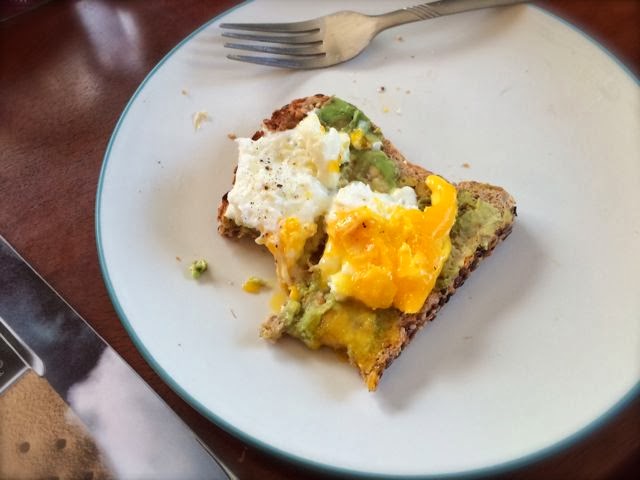 What was your best meal ever? And what are you proud of right now?
Email Post
Labels: Ann Taylor LOFT happy birthday to me King Estate LOFT Ridgeline Trail

Lisa from Lisa's Yarns said…
Yum, your birthday dinner looks awesome and I love your dress! That color looks great on you and I think your hair turned out so good! Way better than if I had tried to curl my hair!

The best meal I have ever had when eating out was probably the meal I had at Colicchio & Sons in New York in August. I'm proud of the fact that I have been crying less lately after crying nearly every day during the month of December.... I guess I am starting to see the light at the end of the tunnel of this darn move so that is good.
January 6, 2014 at 4:05 AM

Leigh said…
That's awesome that Pete organized a nice dinner out for your birthday! Love your dress and your hair. You look fantastic!
January 6, 2014 at 8:29 AM

Elizabeth said…
Happy belated lady! The new haircut looks great and I hope Eugene gets some of the glorious sunshine we've had in PDX. Looks like we're headed back for rain again though! Good luck with the start to the term :)
January 6, 2014 at 2:44 PM

Amber said…
That looks like such a divine meal - good job Pete! And you looked gorgeous - your hair turned out great!

Omg it is hard to pick my best meal EVER but probably one of the pasta dishes I had in Italy. I remember moaning and groaning over a couple of them when we were there. I'm proud that by trying to stick to healthy habits I managed to lose 4 pounds and a 4 inches over the busy holiday season. I think the inches part is mainly from adding strength training back into my routine. Can't believe what a difference that makes!
January 6, 2014 at 6:11 PM

Nilsa @ SoMi Speaks said…
I think birthday dinners are all the more fun when you spend a little time primping, especially when that's not really the normal mode of behavior. Your dinner looks delicious - they clearly don't skimp on serving size!

I've been lucky enough to have gone to a number of really excellent restaurants in my lifetime (mostly thanks to parents who are foodies). Most recently, though, it's my husband I have to thank for taking me to Michelin-rated Grace for my birthday in December. What a meal!
January 14, 2014 at 10:58 AM

Stefanie said…
I love your birthday dress. You always have such cute, well planned outfits!
January 17, 2014 at 7:27 PM

Lindsey said…
That dress is so cute! Nice work on your headstand/handstand. It will definitely come with practice!

Right now I'm proud of stepping out of my comfort zone to teach yoga classes. Not that I have a choice :) but it has definitely been a challenge for me!
January 19, 2014 at 4:20 PM