While our actual honeymoon will be next summer (Europe!), it was really nice to have a week long vacation after the wedding to simply let the idea of being married sink in. That and unwind from a few stressful months of planning.

Pete's parents stayed in Oregon for the next week, so we wanted to visit a few beautiful parts of Oregon they hadn't seen before. First up was Crater Lake! I had been there once before for a quick glance, but never spent any serious time there and Pete had never been.

Sunday morning, two days after the wedding, we drove about 2 1/2 hours to Crater Lake, where you pay $10 to enter the park and then are able to drive around the entire 33 mile rim of the lake (during the summer) and stop at multiple viewing points and even hiking trails. 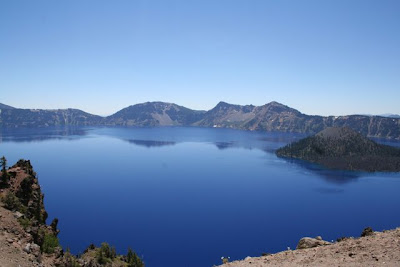 We stopped at several spots around the rim to take photos and simply stare. 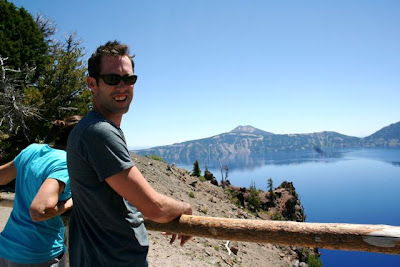 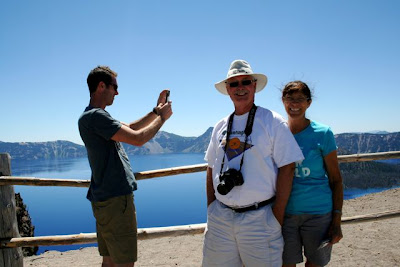 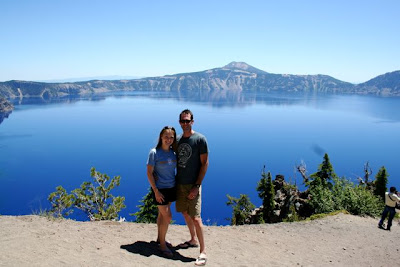 Talk about some blue water... 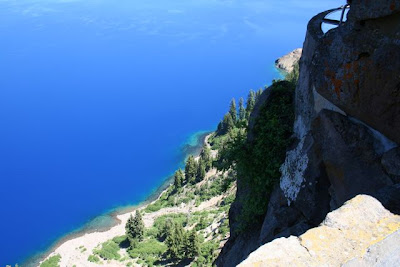 It was around 2 p.m. by the time we headed into the lodge for lunch. We all had a drink while waiting for our table and then ordered food, which was just so-so. The lodge was pretty impressive inside however.

It books up about a year in advance so if you ever want to stay there... plan ahead! 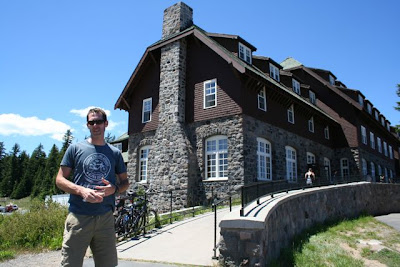 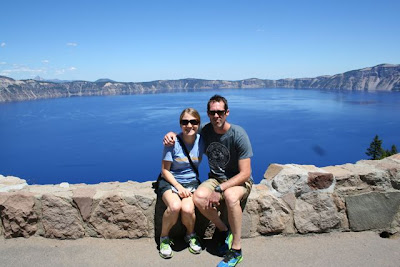 About halfway around the rim, we decided to stop for a short hike (2-3 miles roundtrip) to Plaikni Falls. It felt good to get out of the car and stretch the legs a bit. 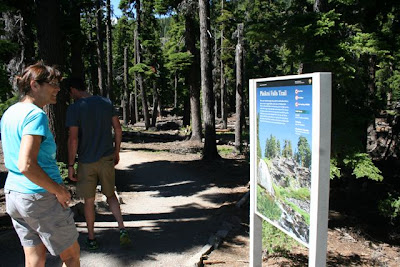 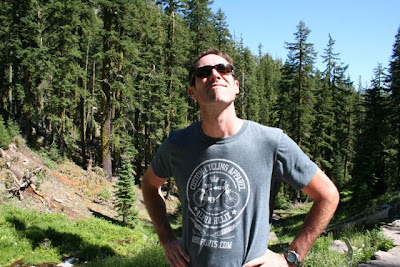 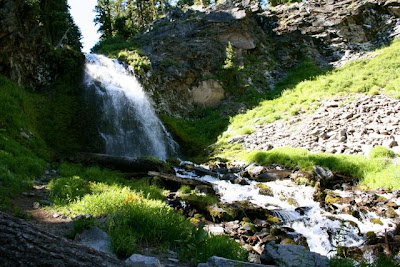 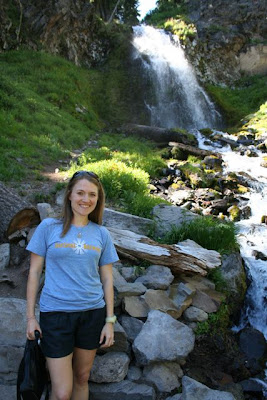 Then back in the car we went for more sights. 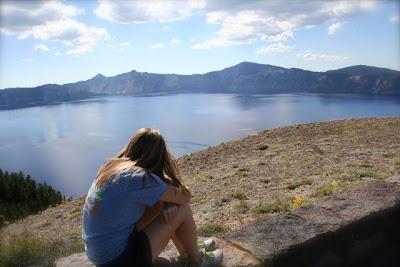 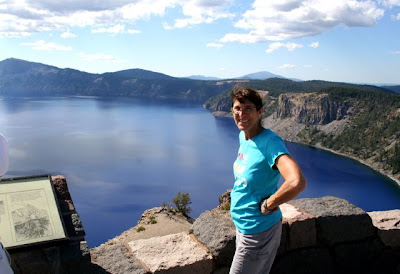 Around 4:30 or so, it was time to get moving on to our humble abode for the evening, Jo's Motel. Because I hadn't planned a year in advance, Crater Lake Lodge was booked up by the time I started looking into it.

Jo's was an interesting experience to say the least, but we had a place to stay and the motel has a small organic grocery store. It was about 30 minutes from the rim, which is saying something for being in the middle of pretty much nowhere.

The next morning, we got on the road early to head toward Southern Oregon for some wine tasting and a night at a B&B in Jacksonville, OR.

First stop was breakfast in Ashland and then on to Lithia Park for some pretty scenery (and crooked trees)! Ashland, OR is known for its Shakespeare Festival. 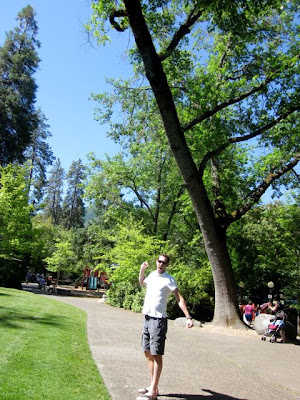 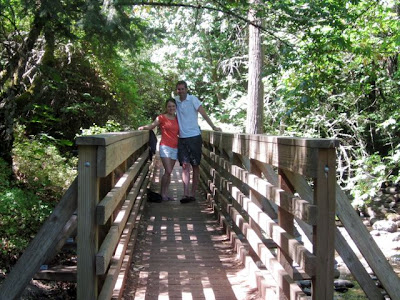 That afternoon we took Pete's parents to RoxyAnn Winery where we'd been a few years ago. A few glasses of wine, some cheese and salami later, we were happy campers. 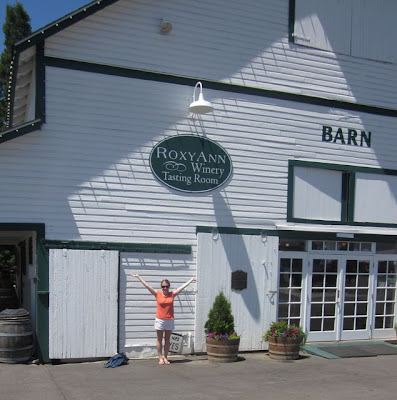 The B&B we stayed at was very pretty with an impressive kitchen, but it was really hot at night, which made sleeping difficult. The next morning, I woke up pretty early and pulled on my running clothes.

After a few days hiatus from any kind of running, I needed to pound the pavement. 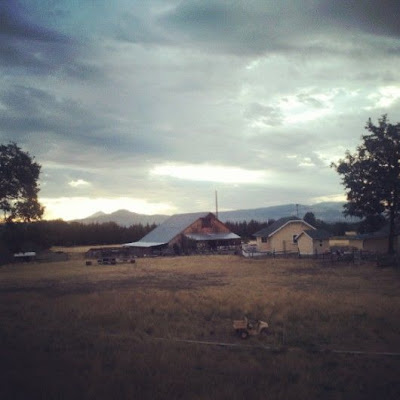 
I ran all around the little town of Jacksonville, said hi to a family of deer and cranked out 6 or 7 miles sans Garmin.

After breakfast on the porch of our B&B (poached pear, eggs, rosemary potatoes, peach scone w/ clotted cream) on Tuesday morning, the manfriend and I dozed in the hammock on the property. I could seriously go for one of these in our back yard. Relaxing x 10. 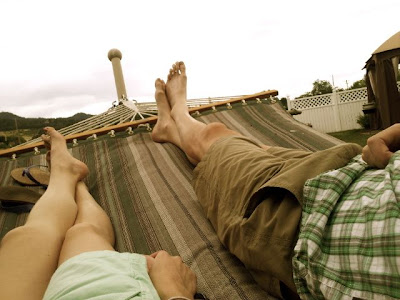 And then it was back to Eugene! We met his parents for dinner and then they headed back to Bend for a few more days, while we just enjoyed not going to work. 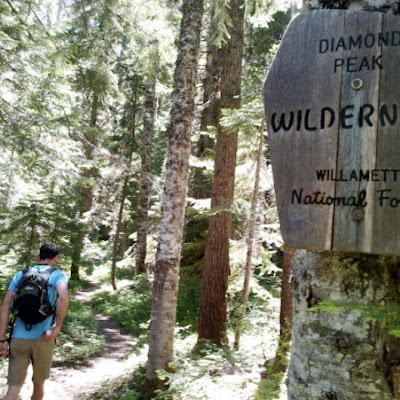 We even managed to go on an 8 mile hike with the dog and see a movie - two things we rarely do.

I couldn't have imagined going right back to work after the wedding. This week was so needed for our sanity. It also showed me that "staycations" or "stay close to home vacations" aren't all that bad.

What's the natural landmark/place you've ever visited? What did you or would you do for your honeymoon?

I highly recommend visiting Crater Lake if you come to Oregon. By far one of the most beautiful places in the state, although there are MANY!
Email Post
Labels: Crater Lake honeymoon Jacksonville mini moon Pete and Lauren's Wedding

Amber said…
My coworker recently visited Crater Lake as well and I couldn't get over how BEAUTIFUL the water is! I would love to come check it out one day!

I'm glad you guys did a mini moon. I loved going on our honeymoon right after the wedding - it was just so wonderful to get away and spend time together as husband and wife!
August 13, 2013 at 2:50 PM

Tasha Malcolm said…
What a fun week off to "mini moon". I would have loved a "mini moon", but my husband was dead set on leaving a couple of days after our wedding for our honeymoon. It was fun, but it might have been nice to not have felt rushed to open gifts, say good bye to out of town guests and leave. I haven't been to Crater Lake in ages, but I would love to take my husband. Good to know that the lodge books up so quickly. I would definitely need to plan in advance!
August 13, 2013 at 8:43 PM

Elizabeth said…
Gorgeous! Sounds like it was a great week! I went to Crater Lake last summer for the first time and loved seeing our state's national beauty. I've always wanted to go to Jacksonville but have yet to do so! Would love to see some of the outdoor concerts there. Have y'all been to Yosemite? I always saw pictures of family visiting there and didn't think it was something I needed to see, but after stopping by on a roadtrip...I definitely think it's worthwhile if you guys haven't been....and it's only a day's drive away! :)
August 15, 2013 at 8:36 AM

Lisa from Lisa's Yarns said…
Wow, crater lake is SO beautiful! I think it's great that you stayed local for your mini-moon. It will be better to do Europe next year when you are not exhausted from wedding stuff and have replenished the bank account a bit! That is what my old boss and his wife did - they stayed local for their HM and went to Italy for their 1st anniversary!

I can't remember the last natural landmark I have been to, like Crater Lake. The last beautiful area I have visited is Asheville. I can't wait to be 100% healed from all of my maladies so I can do some hiking in that area.
August 18, 2013 at 10:40 AM