Getting Back on Track

Well, it's been two weeks now since the Chicago Marathon and it's safe to say I'm recovered and trying to figure out my running/workout routine. While I don't currently have a race on the horizons, there are a few shortish ones I'm considering. Running will stay constant in my fitness routine, even if I'm not running 40-50 miles a week.

The first week after the marathon, I took it pretty easy due to my schedule. Those first few days, I took a few walks around Chicago and then Wednesday, I did a 25 min strength routine at home before work. My first official run back was Thursday, four days post marathon. It was a fairly relaxed and chatty 4.5 mile run with a few runner friends. 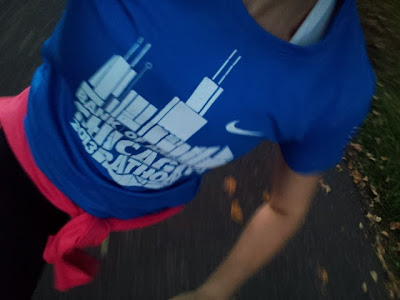 That weekend was busy with work and seeing friends, so I got in a few yoga practices, a short run, and a hike with Lindsey. It's safe to say that my schedule is dictating my fitness, which is okay for now.

Last week, I was happy to fit in a more normal schedule of running:

Thursday: 5.5 miles, including speed work with the Flyers 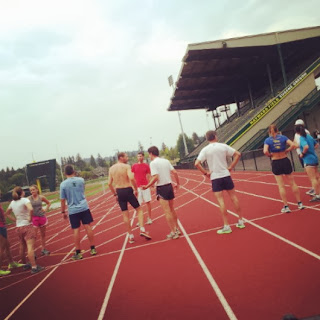 Recycled photo of Hayward - same location, different night
Friday: 5.5 miles on my own in the mist. This run felt like a sanity saver and a super relaxing way to end the week. I then went home, cooked dinner (a rarity these days), and had a glass of wine.

Saturday: 15 min hill trail run, power yoga {in which I got into assisted chin stand a few times!} Beware, this takes a lot of warming up, arm strength and general good sense if anything doesn't feel "right."

Sunday: 1 hour trail run {hip flexors were sore from Saturday like whoa}. I even told the manfriend we could turn around early instead of forcing ourselves through a few more miles. 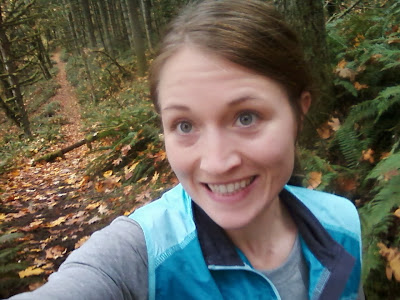 Fueling
One thing I've yet to figure out is how I'm going to appropriately fuel my body running less miles. I still feel equally as hungry, but know I'm not burning as much as before. It's all a balance and it's not a big deal if I gain a few lbs, but I don't want to be eating just for the sake of eating. Especially during this time of year where everything looks like it should be eaten (or drank)! ;)

Over the last year or so, I've gotten better about eating more clean and less junk {processed stuff}. By no means have I been eating veggies, fruit and protein alone, but I was fueling for high performance and energy and there's no reason to derail that train {even when the manfriend brings home a HUGE bag of Halloween candy}.

So, I'm getting back on the healthy eats train with lemon water + apple cider vinegar, green smoothies, and filling but nutritious meals. And on occasion, a few mini twix or some skittles. Luckily, Halloween will be gone before we know it!

The weather here has gotten cold quickly! This morning it was 29 when I took the dog for a walk! Welp, there goes fall...

Do you have any fun recipes on your horizon? I want to try some fun main dishes, but Sunday evening, I made Ashley's pumpkin spice baked donuts {featured on Top with Cinnamon}. Speaking of which, I should really get her cookbook.

Anyone signing up for any holiday races? I always love our local Turkey Stuffer 5K.
Email Post
Labels: post marathon week in workouts

Lisa from Lisa's Yarns said…
I made 2 new recipes this weekend (nicoise salad & a mushroom soup), both of which were Julia Child recipes that I was practicing for the big event in 2 weeks. They were both really good! I might make this Rogan Josh recipe this weekend that my aunt sent me (lentil-based dish) that I will probably freeze for future weeks when I travel.

No holiday races for me... I do love doing a drumstick dash or something like that on Thanksgiving, though. I keep saying maybe I will run next month, but I think I need to stop saying that as I keep setting myself up for disappointment so instead I will say that I am glad my body is doing well with the spin classes I started taking this week!
October 29, 2013 at 4:59 PM

Elizabeth said…
I can imagine it'll be a transition. It's hard to balance it all but I'm still totally impressed with all the activity you're able to do! Btw have you ever run the Holiday Half from Adidas to St Johns? Thinking about it and wondered if you had any insight...
November 1, 2013 at 10:46 PM

Good job with the lemon juice + apple cider vinegar. I don't love the taste, but I like how it makes me feel.

Amber said…
Oooh chin stand has never been taught in any of the classes I've done. It looks intense!

I am definitely letting my schedule dictate my workout schedule these days, which last week meant only 2 short runs and a 30 minute strength training workout. I am hoping my schedule lets me fit in more than that in the coming weeks though as I did not feel myself after such a low workout week that also included lots of bad eating! I think my favourite thing in taking a break from marathon training is the lack of long weekend runs. Those were what I was truly getting burnt out on after running both Saturday and Sunday through most of the summer!
November 2, 2013 at 2:36 PM